SCHAUMBURG – Advocacy is one of the five key aspects the Technology & Manufacturing Association offers its members. Through Advocacy, lawmakers at federal and state levels learn about small and midsized manufacturers’ unique needs. 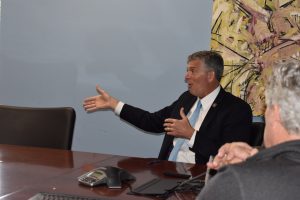 Over the past several months leading up to the November 2022 election, TMA’s Advocacy Team worked with TMA members to arrange visits from candidates and lawmakers to familiarize them with the challenges manufacturers face and offer solutions to encourage the industry nationwide and locally.

Rockford area TMA member Superior Joining Technologies’ owners Teresa Beach-Shelow and husband Thom Shelow hosted a tour with Congressman Darin LaHood, who now represents the company to the US Congress. Other TMA members hosted congressional candidates in their plants. All reported positive feedback on the visits – both from the candidates and the hosts.

The TMA Advocacy Team hosted online interviews with several gubernatorial candidates before the June 2022 primary and then with congressional candidates leading up to the November 2022 election. The discussions remain available on TMA’s YouTube channel.

Before interviewing candidates, the TMA Advocacy Team sent out questionnaires to state and federal candidates on topics important to our TMA members – from regulations to tax and workers’ comp to tort laws. Also, questions about training a new generation of manufacturers.

Responses to those questionnaires led to voter recommendations to TMA members in the election.

The TMA Advocacy Team also encouraged conversations about Illinois’ ballot referendum being the nation’s first to include a state constitutional amendment that protects public sector unions. TMA worked with other business groups to defeat the amendment but narrowly lost the effort at the ballot box.

The TMA Advocacy Team will highlight the upcoming 2023 municipal elections and the Illinois General Assembly’s activities starting in January 2023.