From Bloomberg’s story: American Factories Are Making Stuff Again as CEOs Take Production Out of China

The construction of new manufacturing facilities in the US has soared 116% over the past year, a July 5th story in Bloomberg reports.

In January, a UBS survey of C-suite executives revealed the magnitude of this shift. More than 90% of those surveyed said they either were in the process of moving production out of China or had plans to do so. And about 80% said they were considering bringing some of it back to the US. (Mexico has also become a popular choice.)

This is, of course, a nascent trend. And so many manufacturing jobs were lost here over so many decades — about 8 million from peak to trough — that almost no one would argue that the current trend marks a return to those halcyon times. The rise of automation, which has eliminated many low-skilled, low-paid jobs, means US factories today require a much smaller group of workers.

Read the rest of the story HERE: https://www.bloomberg.com/news/articles/2022-07-05/us-factory-boom-heats-up-as-ceos-yank-production-out-of-china 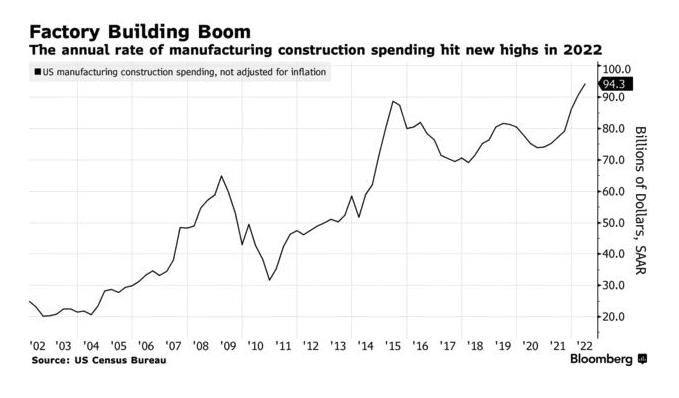