TMA’s Related Theory Apprenticeship Program is a 3-year long course and has been assisting manufacturers in training their apprentices for over 75 years. While completing the program on a scholarship funded by the Broadview-based company, the students will also have manufacturing jobs at Principal Manufacturing to refine their trade and craft.

“Most signing days you see are for athletes, but today on Apprenticeship Signing Day, we’re celebrating two students who are advancing their career in manufacturing and becoming key leaders in getting more of the next generation involved,” said TMA President Patrick Osborne. 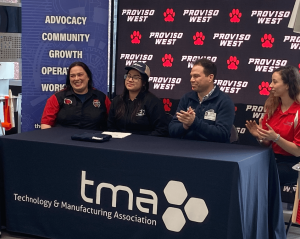 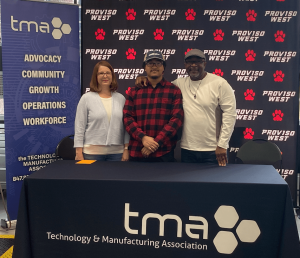 Brenda Guerrero is a first-generation Mexican American who became fascinated with design during her time in their manufacturing program and credits her teacher’s commitment to engagement as a “main motivator” in her decision to pursue a career in manufacturing. Aaron Lee became interested in machining when he took the Mastery of Metals class in school, and at 18, is excited to have already learned valuable lessons and sees the apprenticeship program as “[a] huge opportunity for success.”

“At a time when employers across the state are struggling to find skilled workers, TMA’s Related Theory Apprenticeship program helps bridge the skills gap by connecting students looking to get involved in the industry with a manufacturer needing to find a skilled technician,” said April Senase, TMA Instructor and Proviso West Advanced Manufacturing Teacher. “This provides high school graduates interested in manufacturing the opportunity to pursue a successful, lifelong career.”

Brenda Guerrero will be in the Apprenticeship Program to become a CNC Machinist and Aaron Lee will be studying to become a Tool & Die Maker.

About TMA: Founded in 1925, the Technology and Manufacturing Association is an independent trade organization exclusively focused on assisting and promoting small and mid-size manufacturers by providing a diverse portfolio of benefits and services, including: community, information, training, resources, and advocacy. TMA has nearly 1,000 members representing over 35,000 manufacturing employees and more than 25 million square feet of manufacturing plant.