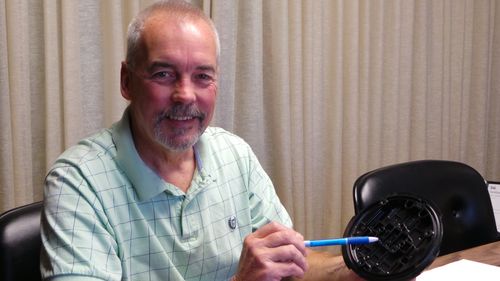 BRIDGEVIEW, IL – Eighty years ago, an engineer that produced parts, molds and equipment for an electrical company took up a challenge from his bosses to start a new business that would supply plastic parts so the company could free up plant space.

“It was the Depression years and things were tough, especially to start a new company,” Andre said.

But over the next 64 years, the Andre Family gained full ownership. In 1998, Rich’s father Dick Andre, his brother Bob and he bought out Van Norman Molding’s remaining partners, allowing Rich and his brother to own the privately-held company headquartered in Chicago’s southwest suburban Bridgeview.

Van Norman Molding LLC has 45 employees between two locations – one in Bridgeview and a second at a 20,000 square foot plant in Corbin, Kentucky. Van Norman Molding’s annual sales are at $8 million dollars.

Rich, now Van Norman’s Vice President of Sales, has an array of products in his office meeting room, and the last 24 years of working with customers has made him into a walking encyclopedia on custom molded plastic components, thermosets, composite molding and thermoplastics.

While the average person isn’t familiar with molding process terms such as “injection,” “injection/compression,” “compression” and “transfer/insert,” most are familiar with the products these processes end up creating.

“Few people realize how the backs for their electrical meters are made, and few understand the work it takes to find the right plastics to make everyday items they may have on their house,” Andre said.

Because of American ingenuity and research, the products and the materials of which they are made have technologically advanced over the years. Consumers are safer now than ever before.

“Phenolics tolerate high temperatures and do not put pollutants down the hole for gas or oil, a concern for environmentalists,” Andre said.

Van Norman Molding also makes thermoset insulators for electrical transformer connections that are replacing ceramic insulators with new ones that will last 20 to 30 years.

The company’s engineers and designers work with plastics manufacturing companies to recommend the best materials for manufacturing. A typical Van Norman order ranges between 10,000 to 2 million items.

Andre says that the American plastics industry is facing stiff competition from molding companies in China. The Chinese parts are cheaper because the country’s government heavily subsidizes manufacturers and Chinese laborers are paid a fraction of what American workers are paid.

But in many cases, the materials are not up to American standards, Andre said.

“American standards are different than Chinese parts,” he said. “American parts have metal components, a superior gauge and thickness, and alloys that come from years of testing by engineers.”

Customers may get less expensive parts from Chinese suppliers, but those parts are of a different quality and could end up costing them more after all, Andre said. “It means something if the materials are made in America.”

Andre said because of the problems with ordering parts from overseas, companies one at a time are beginning to look into “re-shoring” – and effort to reverse the offshore path so many companies have taken in the last decade with hopes of cutting their costs.

Not only is the quality of American-made parts superior, molding companies like Van Norman are able to work closely with material developers to get customers the right materials for their projects.

If there was anything he could change anything in our industry right now, Andre says he’d like to raise the importation duties on products coming from China.

“Back in the day, way back, government was run by duties paid on incoming products – like in the 1700 and 1800s. I know there are countries that slap high import duties on some of these ultra-cheap goods that really helped foster development of their in-house industries, or those in their own countries,” Andre said.

Until those changes to importation duties are made, though, Van Norman Molding plans to work hard to convince their customers choosing products made in America are cost effective.

“What do we bring to our customers?” Andre said. “We can create advanced mold designs, molds that run automatically, rapid prototyping and competitive costs.”

And overall, they’re worth every penny.

Celebrate the Fourth with “Made in America” festivities