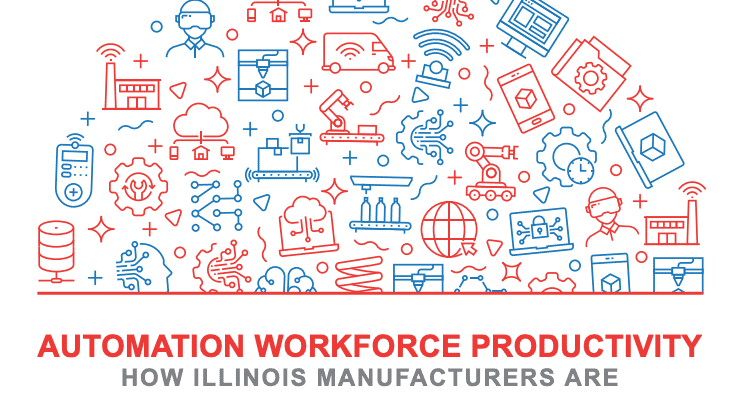 When the COVID-19 pandemic hit and shutdowns were ordered in the state of Illinois, the state’s manufacturing sector held its breath.

But only for a second.

Within days, if not hours, of Governor Pritzker’s first Executive Order issued in March 2020, questions from TMA members were raised and answered.

Which businesses would be essential? How will we set up for the safety of our employees? How will COVID affect our personnel and their families?

What does all these mean for our businesses tomorrow, next week and next month?

While TMA was on alert, answering question after question of its anxious members, the Illinois Manufacturing Excellence Center (IMEC) became fascinated with how manufacturing suddenly took the limelight as shortages of personal protective equipment (PPE), ventilator and respirator parts – even toilet paper – hit news headlines.

That dilemma, along with another key topic of interest, led to IMEC organizing a focused study led by the Upjohn Institute, with the help of Technology & Manufacturing Association members.

“First, U.S. manufacturing productivity had flattened and declined over the past decade. The other big storyline was small and mid-sized manufacturers’ adoption of technology is slower than large manufacturers,” Boulay said.

Just how did the two topics correlate?

Today, manufacturers stand at a crossroads. The COVID-19 pandemic has forced manufacturers to rethink their competitive position and resiliency to disruption. On top of that, U.S. manufacturing has been experiencing declining productivity growth. The competitive and economic risk of such changes can only be resolved with investments in new skills and new technologies.

2. Two-thirds of manufacturers have made modest to minimal progress in adopting advanced manufacturing technologies.

4. It’s automation AND workforce: Drivers and barriers to adoption.

6. Technology to meet mix and volume.

10. There is still so much to learn about advanced manufacturing technologies, and so many ways to do it. Indeed, the study showed the more Illinois manufacturers embraced advanced technology, the less adverse impact the pandemic had on their companies’ workforce and activity.

Nearly two in ten manufacturers (19.2%) reporting their cognitive operations were performed fully manually, with no computer or digital assistance, also said current employees were unable to work during the pandemic. Comparatively, only 7.4% of manufacturers that reported they mostly used computers or digital technologies, along with some manual assistance, reported the same.

Among those that said they had made substantial progress or had fully integrated advanced manufacturing technologies or processes in the last year, 91% said they were optimistic about the future. Three out of four (77.8%) of those that had not updated their systems were as positive about the future.

And while 77% said making those changes were important to their business, 71% participating in the survey said they plan to or are currently implementing advanced manufacturing technologies. Of those, 56.9% reported limited progress in making those updates.

WHAT THE FINDINGS MEAN

The findings were concerning, the IMEC study said.

So why aren’t small to mid-sized manufacturers investing more in their machinery and systems when updating could help their production and business outlook? After all, it’s clear investing in advanced manufacturing technologies, regardless of firm size, creates a competitive edge.

The answer is complicated – as any CEO or owner of a manufacturing company will agree.

In order of importance to the survey responders, those most hesitant to invest are concerned that:

2. Talent and skills to make the technology work at its full capacity is hard to find.

There’s another issue as to why more small- to mid-sized manufacturers are reluctant to jump in the advanced manufacturing technology waters: Company leadership’s personalities and experiences heavily influence their business strategies, and often their willingness to invest in cutting-edge technologies they consider experimental.

“Per my observation, there is a ‘growth’ mindset among many of ‘I want to learn more,’ ‘I want to keep getting better.’ And then there’s what we call the ‘status quo’ mindset. I don’t mean that in a mean way,” Boulay, who has been working with manufacturers since 2011, said.

“For manufacturers to come out of the Great Recession, come through the pandemic to be where they are today, they are successful entrepreneurs,” Boulay continued. “They’ve done well, they’re doing great things – they’re paying the bills, they’re putting money away. This is success.”

And that success leads to those prudent company leaders being especially thoughtful and cautious about automation purchases. Not only does it demand investing in technology, but it also demands investing in new skills training.

“Understandably they think, ‘I don’t want to invest in new cheap technology to take me in the wrong direction because I still have ratios and margins, to keep my costs tight,’” he said.

The IMEC study does propose governing bodies investigate ways to provide tax incentives, grants, and loans to small and mid-sized manufacturers to help them find funding for advanced manufacturing technologies.

Boulay said he was encouraged by the study’s finding that investing in automation and workforce skills together will likely bring more and more manufacturing back to the U.S. over the next decade.

“We do see the potential – it doesn’t switch overnight – that automation will be a big part of dealing with supply chain concerns and boosting the reality of reshoring manufacturing to the U.S.,” he said. “The automation solution is one that helps us deal with the challenges of lower wages in other countries – and it will keep us in the forefront of the industry.”

Ed. Note: The majority of the IMEC study participants were members of the Technology & Manufacturing Association. Download a copy and read the whole study from the TMA News website – www.tmanews.com .