Al Panico says all the time people say they have to do a double take when they see his name on a credit card.

But Al Panico’s life before his role as president of manufacturer The LINE Group, Inc. in Arlington Heights Illinois is also a fascinating, unique storyline.

Panico was born and raised in Newark, New Jersey – a tough childhood where he spent much of his time when not at school helping at his father’s neighborhood business. While several of his boyhood friends chose more destructive life paths, Panico pursued a college degree in finance and accounting – a natural choice for him, he says.

“I grew up on the streets – but studied finance because I knew that I’d be able to do anything as long as I understood money,” he told TMA News Bulletin. “I worked with my father at his gas station from the time I was 8 years old. I could even do tune ups and brake jobs.”

After graduating from Pace University in New York, Panico worked in finance and accounting before interviewing for a corporate controller position with the Chicago-based Merrill Chase Galleries.

During his nine years there, Panico learned about fine art, merchandising, merchandise processing and eventually, the acquisition side of the business. He dealt with works of sculptor Frederick Hart, Beatles’ musician and artist John Lennon, actor and photographer Roddy McDowell, pop culture painter Peter Max, sports artist Leroy Neiman and other renowned artists as well as works from Rembrandt through Picasso.

When Panico transitioned into the manufacturing arena, he brought with him the experiences he acquired in merchandising. At the time, the owner of The LINE Group, Inc, who lived across the street from him, offered him a position.

Panico says he didn’t want a “job,” he wanted an “opportunity.”

“My neighbor offered equity in the company as an incentive, but I didn’t have much hope when I saw the company’s financial condition. After the first week, I thought it would be over shortly. Fortunately, I was able to hold off the bank foreclosure, work out the issues and then refinance in 1996, and keep the business going,” Panico said.

And while it hasn’t been easy the past 26 years, the company continues to successfully produce at its Arlington Heights location. They’ve even bought up two smaller companies along the way, Skokie Tool and Manufacturing in 2002 and Lauber Tool in 2018.

Panico says The LINE Group Inc has succeeded despite customers choosing to get what they saw as better deals from overseas manufacturers – something every long-term American manufacturer has been forced to face.

In addition, it’s very tough to find qualified team members to fill vacancies that retirees are leaving behind. Most of the current 18 employees at The LINE Group have been working there for decades – but they, of course, will need replacements as time goes on.

At 63, Panico himself says he’s looking towards days of relaxing on an ocean-going boat. But one LINE Group interest he plans to stay involved with during his retirement: the C.A. Myers’ “Awl for All.” The C. A. Myers division of The LINE Group makes its metal parts and assembles a hand-held lockstitch sewing tool that is sold with an online website to retail customers and about 80 wholesale customers worldwide. Panico has been fortunate enough to have grown the sewing awl business about five-fold since he took over the operation.

The C.A. Myers division of the LINE Group works with German needle makers, east coast textile thread manufacturers and other local suppliers to produce the unique tool used by farmers and ranchers to repair leather items, by water lovers to repair sails and pool covers, and by anyone who uses sporting goods, or who go camping, hunting or fishing.

The “Awl for All” was originally patented in 1903 and has stood the test of time so much so that sales are actually growing. Panico likes to refer to his sewing awl as “the last buggy whip” though it still is relevant 118 years later and counting. 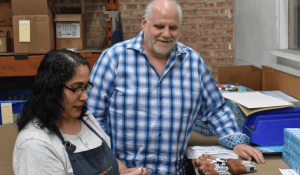 Panico isn’t shy about his disgust with the political system and how it has affected small businesses like his in Illinois and especially Cook County. Mounting a license plate on his personal car entitled “ANRCHST,” Panico was clear as to how damaging corrupt government officials at the local, state and national levels have been over the years.

“This used to be a local, close manufacturing network in the Chicago area. But the more businesses that leave Illinois, the harder it is to for a dependable supply chain. Right now it is nearly impossible to get any raw material. It’s horrible, the worst I’ve ever seen it.”

But to move The LINE Group Inc would cost millions, and that would have a dramatic effect on the company’s team. They are like family, Panico says, and moving would upset whole families that have been loyal for decades – something he doesn’t want to do.

And so is Panico.

“I came from New Jersey, where work is a source of getting money and what you want,” he said. “My father – an entrepreneur himself – put that fire in my belly.”

By Fran Eaton. Used by permission from the July August 2021 TMA News Bulletin.

Tags:
Previous Article
Illinois voters to consider constitutional ban on right-to-work in 2022
Next Article
By 2025, Hawley wants products sold in US, to be 50% made in US