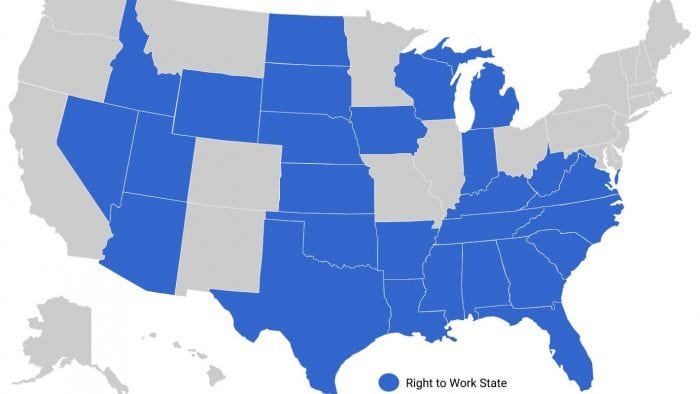 Illinois voters overwhelmingly rejected an effort in 2020 to change the state’s flat tax system to one that would demand tax rates to increase as a person’s income grew. Many contribute the failure of the progressive tax amendment to small- and mid-sized business owners that actively got involved in resisting the additional tax burden.

The super-majority party in the Illinois General Assembly voted in the Spring 2021 session to present Illinois voters with another opportunity to change their state constitution.

This one would solidify Illinois as a labor union-preferring state.

SJRCA 11 would amend the state constitution to specifically ban laws or local ordinances that preserve the “right to work.”

The Illinois Chamber of Commerce writes, “[SJRCA 11] will effectively shut down even reasonable debate over laws that would guarantee Illinois’ workers the ability to decide for themselves whether to join a union to secure a job.

“The amendment specifically bars laws or ordinances that interfere with agreements that require union membership
‘as a condition of employment.’”

John Kaib, of the National Right to Work organization, told TMA News Bulletin the main arguments for the Right to Work are: 1. Freedom and 2. Jobs.

“The moral case for Right to Work is that no worker should be forced to join or support a union as a condition of employment,” Kaib said. “Unions should have to justify themselves to their constituents just the same as anyone else, and workers should be free to resign a union that’s corrupt, radical or just plain ineffective.”

The economic case is that Right-to-Work states win on economic growth, he said.

From 2010-2020, Right-to-Work states saw over four times as much job growth per capita as forced-dues states, like Illinois would become with the passage of the amendment proposal.

The story went on to say, “Factors like operating costs, workforce skill level, transportation access and utility and land costs still dominate a company’s final site selection decision. But when those major factors are excluded, a state’s right to work status trails only environmental regulations and the availability of financial incentives in terms of importance, according to a 2011 Boyd Co. survey of 70 executives at manufacturing companies.”

In a 2004 story entitled “Locked down on Labor,” on Site Selection Online, the Midwest and Northeast are losing manufacturers to Right-to-Work states.

“Even as governors in the Northeast and Midwest bemoan the loss of manufacturing jobs to overseas locations, the American South reaps a whirlwind of factory activity. Experts who study these trends say that the impact of labor legislation in the South — while not usually credited with swaying a corporate decision to locate there — is often the driving site selection factor,” the story says.

“Right-to-work is vitally important,“ says Mark Vitner, vice president and senior economist for Wachovia. “Companies are having to restructure the nature of work. They are having to redefine the entire work process. Right-to-work status enables the companies to have equal leverage [with] the unions.“

No one, including the Illinois Chamber of Commerce, foresees Illinois ever becoming a Right-to-Work state. The private sector labor unions and the public sector state employee unions have too tight a grasp on state lawmakers for that to ever happen, political insiders say.

However, for Illinois to take the bold and nearly-permanent step towards banning the Right to Work – even for small- to mid-sized businesses and employees – could and likely would set into motion an exit for those Illinois manufacturers that are fighting to stay business.

Where are you on this issue? Write TMA News Bulletin at [email protected] to share your opinion.