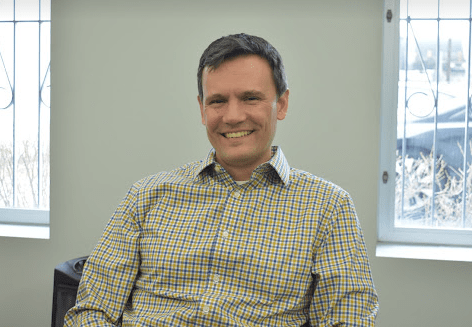 A coating of zinc the thickness of a sheet of paper can protect a steel structure for 100 years. Galvanized coating is one of the most durable methods of protecting against corrosion that is currently available.

During his teen years, George Jr worked summers at the family business – which led him to believe that particular work just wasn’t for him.

“I’d spend 10 hours a day working and would go home exhausted, hot and dirty. Making something like $4.50 an hour, before taxes, as a teenager, I decided I’d do better mowing lawns,” he said. “A friend and I started mowing and made more money. That started me thinking about college and what career I’d work in.”

Gatto studied advertising and marketing at Drake University, and headed into the real estate industry directly after graduating in 2002 – the very field of work that eventually led the Gatto Family into manufacturing.

The older George Gatto was operating a machine shop when the opportunity came up to purchase a plating business in Chicago. Gatto – a tool & die maker himself – had started a small machining business making motorcycle forks.

“He also got into making other things like the polished and plated poles to which velvet ropes for crowd control are attached. Soon he was making different furniture components, and learned how important plating was to each of them,” Gatto Jr. said.

“My dad would go to the plants where they were plating and watch how it was done. The process looked productive, so when the opportunity came up for him to buy a plating company, he did.”

The plating business seller was a member of the Gatto extended family, so Gatto Sr’s father came on to help the effort and ended up staying involved until he was 95 years old, just before passing away in 2018.

In the meantime, the younger George Gatto Jr said he was struggling in a very difficult real estate market during the 2008 economic recession and its aftermath. One day, he accepted his dad’s invitation to join him at a lecture series hosted by the Technology & Manufacturing Association.

During the dinner conversation, other TMA members began asking George Jr why he continued in the struggling real estate industry when his father was nearing retirement age – and would soon be taking his industry knowledge with him.

“My dad was thinking about what his future was, so these guys heard this for awhile from my dad. They said to me, ‘Listen, you know you’re at a perfect point your life where you know you’ve been out working, and you’ve got maybe a five year window if you want to do this,’” Gatto Jr said. “’It’s going to be gone, they said, and you would have passed up a good opportunity.’”

The next day after the TMA event, George Jr picked up the phone and shocked his father by suggesting they have a conversation about him joining the company.

That was over ten years ago. Now George Gatto Jr is president of Gatto Plating and is serving on the Technology & Manufacturing Association’s Board of Directors.

Gatto Industrial Platers, Inc. has grown exponentially in shop floor size and number of employees. The company moved from a 30,000 square foot two-story building in Chicago to another building they expanded to 200,000 square feet. There are currently 150 employed.

“Our sales were down, but we didn’t have to think about shutting down or doing anything like that. We did reduce hours and took a hit to sales in the second quarter,” Gatto said. “But we are coming through in good shape.”

Gatto, 41, says his biggest personal challenge these days as president of Gatto Industrial Platers, Inc. is managing his time. He’s busy every day answering business questions, coming up with industry solutions and strategizing the company’s future – but he also has young family demands.

The Gattos have three boys – ages five, three and one. The pressures mounted during COVID as his wife pushed ahead in her career while together they juggled childcare.

Assistance via email from the Technology & Manufacturing Association was especially appreciated during the early days of the COVID crisis, he said. It helped keep the company’s decision-makers informed as to what state and federal government were doing while team members dealt directly with personnel issues that had never been an issue previously – and helped to answer crucial questions few had time to find on their own.

Being a part of a trusted association network before crises erupted proved to be especially valuable during those early COVID days, he said.

“TMA provided information about what was going on, and what others were doing in these situations. We could take ideas from what everybody else said, and apply that to what worked for us, like where to get needed supplies. That part of TMA is extremely valuable because you build those relationships in a time when you don’t you know necessarily need them, but they’re there when you do need them.”

Gatto says he’s hoping to lead the business to double within the next five to 10 years – and that he will be counting on his involvement with fellow manufacturers in TMA to help him achieve that goal.

“We have the infrastructure to grow that much. I’m interested in developing the technology here over the next few years, and I’ll be looking to others in TMA for ideas on how they’ve updated their companies’ equipment,” he said.

While he may not be able to get as involved in TMA Young Leader activities as he was before his three sons came along, Gatto says he plans to continue to be involved in the TMA board for the next few of years.

“I know firsthand how important TMA networking can be,” he said. “It changed my career path – something I never expected to happen.”

More information about Gatto Industrial Platers, Inc is available at www.gattoplaters.com. The company is located at 4620 W. Roosevelt Road in Chicago.