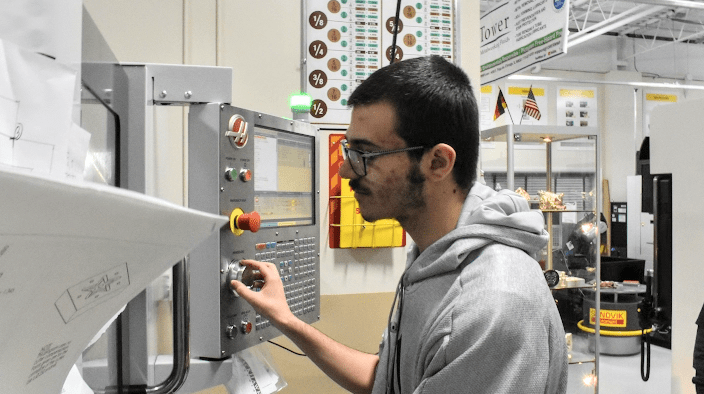 “Apprenticeships not only provide the skilled workers who help Illinois trades and industries to be successful. Apprenticeships also provide a path to success, pride and good-paying jobs for many thousands of workers in Illinois,” said IDOL Director Michael Kleinik.

Dione Scott just finished her first 11 weeks of apprenticeship training with the International Brotherhood of Electrical Workers Local 134 in Chicago. Those 11 weeks are akin to completing boot camp in the military, said Donald Finn, business manager for Local 134.

Scott, a 21-year-old African American woman from Chicago, said those first few weeks were intense, but completing them has given her new confidence and a new start. She is in a very different place today than she was just a few years ago due to a difficult family situation.

“When I was 16 and 17, I was mostly living on the streets, living in abandoned buildings,” said Scott.

Despite living as a homeless teenager, Scott continued to attend high school and was introduced to the Chicago Builds program that she says was a lifeline. Chicago Builds is a citywide, two-year off-campus construction training program for Chicago Public Schools’ juniors and seniors interested in pursuing a career in construction trades after graduating high school. Scott was introduced to the trades of heating and cooling, carpentry, welding and electricity through the program.

Electricity proved the biggest challenge – “And I like a challenge,” she said. Scott has had more challenges than most 21-year-olds. Not long ago she was forced to beg for money outside a McDonald’s in her neighborhood. But thanks to Chicago Builds and her apprenticeship program, that has all changed.

“My life has changed completely now not having to worry about all those struggles and just being grateful that I overcame the things I faced,” said Scott. “It’s great. I’m in the process of investing in my own home soon. The apprenticeship is really a blessing to me and my (5-month-old) son. I am so grateful that I am able to pull my weight with the job that I have.”

Not only is Scott certain she will be a journeywoman in a few years after completing her apprenticeship, she’s trying to convince her sister to do the same thing.

Finn said Scott is one of many success stories. In a typical year IBEW Local 134’s apprenticeship program will begin the training of 250 to 320 new apprentices for the five-year apprenticeship.

“An apprenticeship is a segue into a lifelong job,” said Finn, a job that provides valuable benefits like quality health care and a pension. “The apprenticeship is the entry level to the lifelong dream of security, having a stable job.”

The IBEW, other trades and other industries that offer apprenticeships stress outreach programs to inform young people about the possibilities available through apprenticeships. Finn said IBEW Local 134 has long had ties to high schools but is even taking programs into grammar schools now to open students’ eyes to the career possibilities.

“We put a tremendous amount of time and effort into getting the word out on these apprenticeships,” said Finn.