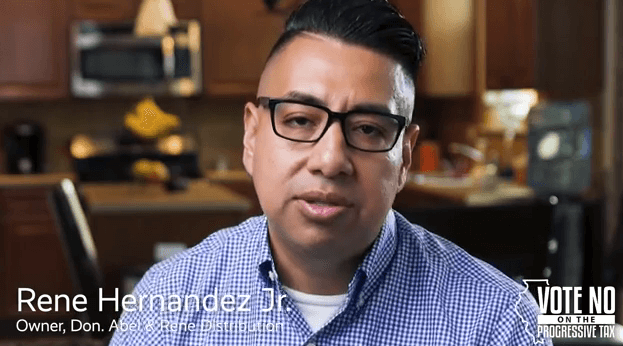 “Who starts a business when a pandemic is hitting? We didn’t know what it all meant. I thought it would be just a couple of weeks of slowdown, but little did I know …” the 43-year-old senior sales rep said, looking back, shaking his head.

But Hernandez decided he would put his hard-earned savings into starting a liquor distribution company – focusing on selling mezcal, a spirit growing in popularity in the United States that is produced in his native Oaxaca, Mexico. So he forged ahead.

Hernandez found opening a liquor distribution business in Illinois is complicated. It involves hiring attorneys and accountants to help with background checks and filling out pages upon pages of paperwork – to just get started.

“At times, it was frustrating and complicated to answer all the questions and pay all the fees,” he said. “I didn’t understand much of what they wanted. But even though I felt like it at times, we didn’t quit. Now with the business starting, I can finally have that confidence that I have it in my control. I’m the boss – I can definitely grow and make it successful.”

That very reason is why Rene’s grandfather came to America in the 1940s – America was the land of opportunity. When Rene’s grandfather was suddenly killed in a car accident, Rene’s father became the breadwinner for his mother and siblings. Later he also cared for his own family – including Rene Jr.

“My dad dropped out of high school and started working. Even with the little they had, he was still in a better situation than if he had remained in Mexico,” Rene said. “I learned to work hard from my dad. He worked three jobs to put me through college. I want my kids to learn the same work ethic. Nothing was given to us – we earned what we have.”

Rene says he was proud to become an American citizen in 2002.

“I’m proud to an American, but I’m not embarrassed to say I was born in Mexico. Still, I am as American as apple pie,” he said. “I graduated from Elmhurst University, I am a Chicago teams’ fan, I vote. It’s important to be involved and give back to the community.”

But Rene is concerned what he’s willing to give back to the state is being misspent and wasted.

“It is no secret that Illinois is a poorly-run state. It’s been managed poorly. The state is billions of dollars in debt,” he said with a sad expression on his face. “It’s very expensive in which to live. A lot of my good high school friends have gone to Tennessee and Texas.”

But for Rene Hernandez, the choice to leave Illinois is not so easy.

“This is where my family lives. This is where my wife’s family is from,” he said. “I want to stay here and be a part of the change Illinois needs – to be more responsible fiscally. I want this state to prosper and be a state where it’s a good place to do business.”

But punishing him by demanding higher taxes if his new business is successful doesn’t make sense to Rene. While Illinois embraces immigrants, its policies are making it very difficult for those very immigrants to start their own small businesses and grow them into thriving enterprises.

“It’s frustrating to run into a situation where the government is making it difficult for me not only to grow, but to prosper, and that’s what could possibly seal my fate,” he said. “That will be really, really hard because that’s not the American dream. That’s not what America was founded to be. That’s everything against the American dream.”

Rene’s company, Don.Abel & Rene Distribution, is working to distribute Salvadores Mezcal as soon as next month. He’s building towards the American dream with all the hope within him that Illinois will make a radical change and finally start encouraging new business endeavors like his.

If Illinois doesn’t start in a new direction, it will be devastating, he says. Stopping the Progressive Tax amendment on the November 2020 ballot would be the first step to slow down an impending financial disaster and stop discouraging new enterprises like his.

“For a state government to set up more obstacles and hurdles to keep us from becoming successful is wrong. That is not what America was made to be,” he said.