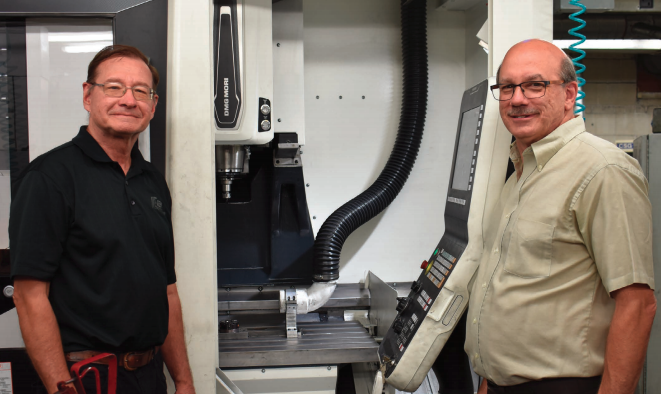 When you’re giving your dog a treat, did you ever think about how a dog biscuit gets its distinct shape of a small bone with a clear brand impression?

How about how a particular brand of well-known carnival cookies that resemble elephants, monkeys or giraffes? Or how about the design on those chocolate sandwich wafers with sweet white icing that are often dipped in cold milk?

Jim Fromm and his cousin Scott Fromm know well how all that’s done. They’ve been working on such projects since the 1970s, when they each started working at F & S Engraving – their family’s business. Each of them followed their own fathers’ footsteps.

Jim and Scott’s fathers were brothers that made up the second generation of F & S Engraving owners. Their grandfather and great uncle started the company 98 years ago.

When F & S Engraving started in 1922, they focused on machining steel stamps that were used to mark artillery shells and bearings. These days, a little more than half of F & S Engraving’s work is with bakeries. The rest is with the tool and die industry.

“In 1970, my father and Scott’s father were both on a bowling team with an engineer from a cookie-making company. The engineer asked our dads if they could engrave a cookie roll,” Jim Fromm told TMA News Bulletin.

“They said they were willing to try. So, they took the head off a pantograph, and used the cutter to follow a particular pattern and cut the cookie shape in the bronze roll.”

“Our dads thought there had to be a better way to do the process, so they worked to build out their own NC engraving machines,” Jim said.

After building two machines to engrave the bronze rolls and because of their dads’ ingenuity using NC, F & S Engraving proved to be twenty years ahead of their competition, which, for the most part, was still focused on following patterns to engrave the rolls.

When Jim started working at F & S Engraving, he worked in the layout department pasting characters and making patterns. “At the time, tool & die work was 99 percent making patterns and working with a pantograph. The technology of cutting advanced, the machining processes kept progressing, and with the computer, the work became faster and more consistent.”

F & S Engraving now has 25 team members employed – and while Jim continues to oversee the machining process, Scott focuses on bringing work into the plant.

“I’m in the office,” Scott said. “Jim’s more knowledgeable on the machining process. We do some sales, but we’ve been lucky. In most cases, our work has been due to word of mouth and repeat business.” They also have two outside salespeople.

Like other American manufacturers, F & S Engraving lost some mold engraving business when it went across our northern and southern borders. They lost more business when their customers lost business to China, as well. But they’re happy to see some of that business slowly returning to America.

A tour of F & S Engraving shows one after another long rolls of heavy bronze – and specialist after specialist perfecting those unique cookie cutters.

“We’re still here after all these years,” Jim said. “In the 1990s, a lot of mom and pop places didn’t survive. We’re now into the third generation – with at least one son interested in continuing the company into a fourth generation.”

Among the work that brings the Fromms the most reward is F & S Engraving’s embossing work. They both said they enjoy running across stamped metal containers on store shelves that hold popular playing cards and name-brand chocolate-covered candies.

“It’s cool to see them in the stores and think ‘Hey, we did this!’” Scott said.

Much of the work they recognize is their decorative design dies that mark metal containers used in the cosmetic, tobacco, and food industries. They are produced using a matched set of male and female dies.

These dies are manufactured to high tolerances to ensure a uniform impression and long life. Mismatched characters will cause the embossing die to shift, causing quality problems on the production line. Imperfect stamping and premature die failure results in defective parts and more short-term investment.

Indeed, the work the Fromms do is specialized, making it even more crucial to keep skilled employees on board.

“I’m proud our employees have stuck with us over the years,” Jim said. “They’re getting older. Right now, 75% of our employees started in the 70s. They grew up with us.”

And what will happen with the company over the next decade is something on both of their minds. Jim is 65 and Scott is 58.

“Finding skilled employees is a huge issue,” Jim said. “Younger prospects are hard to find. We are happy that we were able to get a high school graduate through TMA, and he’s in his first year of the apprentice program. Hopefully we can find another one or two to do the same – learn the equipment and the skills they need.”

What’s been the key to keeping people at F & S? “We try to treat our employees well,” Jim said. “We offer generous benefits. We pay the majority of the health care premiums for our employees and their families. We also pay the first two-thirds of their deductibles. Our parents taught us to treat people the right way. Generally, we get good results.”

Next time you walk down the grocery aisle and grab a package of baked cookies that have a distinct design on the outside – think of F & S Engraving.

They very well could have had a part in its appearance.

Tags:
Previous Article
Which is fairer: Illinois’ flat tax or the proposed progressive tax system?
Next Article
Robots could take 50 million European jobs in the next decade