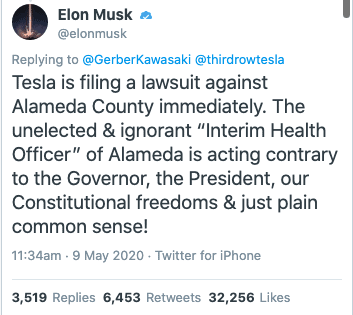 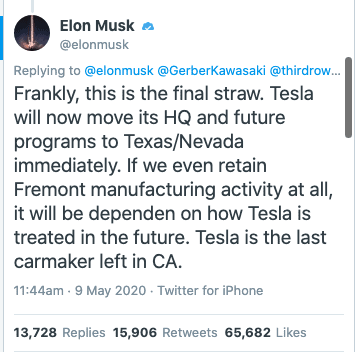 California imposes an income tax rates of 13.3% on its highest earners. So if Musk exercised the options while he was a California resident, he would pay $104 million in taxes. If he waits until he moves to Texas or Nevada, he would owe no state income taxes on the sale — effectively saving $104 million, CNBC reports.

The lawsuit is here: https://wholemars.com/alameda-lawsuit.pdf

Previous Article
For 7th straight week, over 3 million Americans apply for unemployment benefits
Next Article
TMA Prez: Post COVID, Illinois could lose 15 to 25% of its manufacturing base

TMA Prez: Post COVID, Illinois could lose 15 to 25% of its manufacturing base
TMA Media May 12