Robots: Is the Future to be Feared? 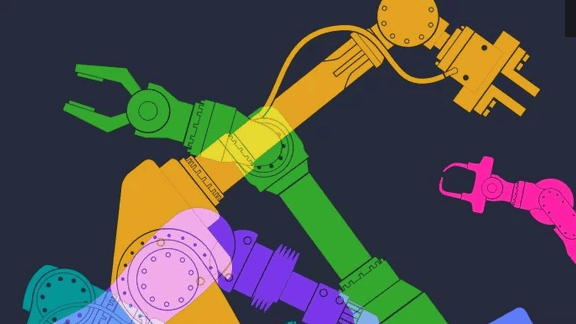 “Danger, Danger, Will Robinson!” were the words most people from the 1960s associated with robots. That automaton, known in the “Lost in Space” series simply as “Robot Robinson” is often the image more mature Americans envision when the topic turns to robotics.

The speed at which robots are developing in the manufacturing industry is stunning. Many see robotics as a way to fill the nation’s critical industrial skills gap.

Missing an estimated five hundred thousand workers, over 28% of American plants report turning down new business and additional revenue because they don’t have the capacity to do the work. Others look to automation as a way to compete globally with overseas countries that while cheaper, force longer lead times, slower deliveries and result sometimes in poor quality.

And whether manufacturers want to face the reality of what these technological advancements mean or don’t mean for the industry as a whole and for their own businesses, robotics and artificial intelligence are here to stay.

“I’ve never seen the industry change as quickly as it has in recent years,” Technology & Manufacturing Association’s veteran trainer Jack Krikorian said. “After I started in the trade in 1984, I worked on manual machines like Bridgeports. Later, in the 80s and 90s, CNC machines became more common.
“It went from there to multiaxis machines and now to 3-D printing. It all happened so fast. Soon robots will not only perform dull, dangerous tasks, I’m told they’ll be assessing their own operations and then correcting their own mechanical problems.”

The robotics wave has already hit manufacturers – and despite the financial investment and overall shop culture changes they sweep in, the technological deluge can’t be avoided or escaped.

“There is a serious need to adapt industry training and challenge employees to upskill so they’re able to program and oversee robots,” Krikorian said. “We’ll see more and more dull, dirty and dangerous tasks being done by robots rather than humans. But we will still need humans to program, oversee and repair those robots.”

Up to 20 million manufacturing jobs around the world could be replaced by robots over the next 10 years, according to British analysis firm Oxford Economics.

But those figures can be misleading about the future of manufacturing careers, says Professor Alan Woodward of the University of Surrey.

“Automation is not here to put people out of work, it’s here to free them up,” he told the BBC. “We’re better off using people’s brains, not their hands – things that machines can’t do. That’s what we should be heading towards.”

U.S. LAGS BEHIND OTHER COUNTRIES

One of the most common reasons US manufacturers say they don’t use robots is they lack employees with skills to manage them. A lack of internal skills doesn’t just limit a company’s capacity to take on a big robotics project, it can limit its ability to get started with just one robot, author Samuel Bouchard of Lean Robotics writes.

That’s why robotics companies are offering training with the purchase of their products, and why easy-to-program collaborative robots are growing in popularity.

Traditional industrial robots require expert set-up and high programming expertise, while the newer, more versatile “cobots” are easier to program, set-up and use.

The point is robots are advancing technologically, and their uses are becoming more and more diverse while their cost remains the biggest obstacle, Bouchard writes.

While the bigger robots can cost millions, smaller cobots can run $50,000 to $60,000 each. Such an investment is like adding another team member – one that can work around the clock, with a simple phone app providing any needed oversight.

“Depending on their use, these machines can pay for themselves in ten to twelve months,” one Universal Robots representative said at a robotics forum in the Chicago area.

Manufacturers that saw the handwriting on the wall early on say robots are nothing to fear.

Panek Precision in Northbrook, Illinois bought their first robot five years ago at a trade show. They now have 60 robots on the shop floor. Even with
that, their human workforce demand increased.

“Our employment increased 30 percent with robots doing the jobs of three to four people. With robots, our employees’ work is safer and better quality while they are more interactive. At the same time, the employees learn new skills,” Brian Panek told TMA News Bulletin last year.

The same is true at Hi-Grade Welding, where the company recently added a six-site automated welding cell.

“Our guys embraced the welding robot,” Hi-Grade’s Vice President Jon Frejd told TMA News Bulletin. “At first they said, ‘There goes my job,’ but now it’s different … Without that technology, we wouldn’t be where we
are today.”

Hi-Grade has six to ten welder openings due to an increased volume of work. It couldn’t be a better time for automation to advance, TMA member after member says.

With the current national emphasis on reviving American manufacturing, the shortage of skilled workers and the opportunity for small to mid-sized companies to grow, more and more agree that now is the time to consider robots and automation.

In other words, hearing the “Danger, Danger, Will Robinson!” may be better interpreted these days by manufacturers as a warning not to miss a chance to step into the future.