Training: the future of manufacturing

“On any car that drives by, I helped manufacture that. And that’s an awesome feeling inside to be a part of that and also be … Made in America…” – Bryan Melgoza

Featured in a new TMA video, Bryan Melgoza has become one of the spokespeople demonstrating first hand the value of the Association’s training and education programs.

Melgoza, 30, started working at Principal Manufacturing in Bridgeport, Illinois, part-time ten years ago. He was in the process of completing Emergency Medical Technician (EMT) training when during a conversation at the fire station he realized he was making three dollars more an hour part time as a forklift operator than he would as an EMT. Not only that, Principal said they would pay for his training if he wanted to upgrade his skills.

“When I was a kid, I thought everything was made in China. That’s what the labels all said. Seeing what they were doing at Principal completely changed my thinking,” he said.

“Changed my thinking…” The very thing manufacturers are striving to do to cultivate the crucial American industry for years to come.

Bryan Melgoza is a prime example of the type of team members manufacturers are seeking for their companies. Soon after joining the company, Ricky Barnett, a member of Principal’s owner family, took their new forklift operator under his wing as Melgoza began asking questions about the work going on at Principal.

Melgoza started his Related Theory classes at TMA two nights a week five years ago. He pursued certification in Tool & Die, graduating in 2018. This year he completed TMA’s CNC programmer coursework and graduated with nine others in his class.

It’s taken a village to get him this far, Bryan says. As the oldest child in his family, he grew up encouraging his brothers and sister to do their homework and work hard. When in high school he made friends he still sees today, and they pushed him to do what he has always liked to do – work with his hands.

But his wife Marina has been his biggest supporter, Melgoza says. During his five years spending two nights a week training at TMA, his wife has had three boys – now ages five, three and two. 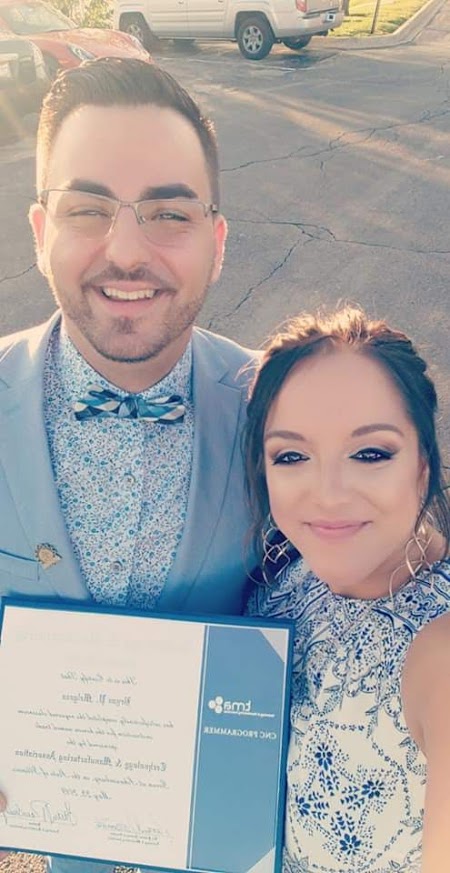 “I would not be who I am without the help of my wife and three boys,” Melgoza said. “She’s proud of where I am now and our future. She has her own work doing hair and makeup, but she encourages me to keep going.”

Melgoza has just taken on a new challenge. He’s teaching a General Die Knowledge class at TMA. It is the association’s first long-distance video training class – with seven students at TMA and seven others taking the class from Olin Brass in East Alton, Illinois.

“It’s pretty cool,” Melgoza said, “I’m happy to be teaching the class for those not in the tool shop. When we’re finished, they’ll know more about what a toolmaker is talking about – and that’s good for everyone involved.”

Melgoza is volunteering with The Young Invincibles, a group that promotes apprenticeships among minority and distressed communities. Their goal is to provide the upcoming generation with hope via careers and training – and “changing their thinking.”

“Anybody can get a job in manufacturing. Man, woman … there’s an endless amount of work that you can pick a door to open and learn and grow into that trade,” Melgoza says in TMA’s Be Next video.

“To the person thinking about getting a job in manufacturing … let me help you out because I would be more than happy to show you what you can do,” he concludes.