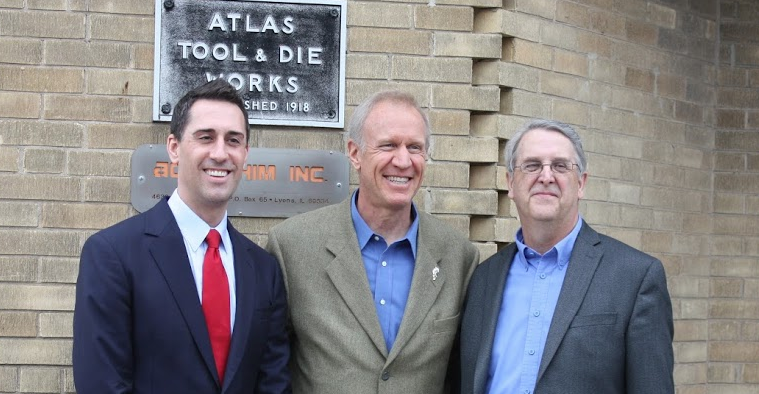 Over the past two decades, Illinois has lost roughly 280,000 manufacturing jobs. And as those good-paying jobs have departed, so too have many longtime residents. Illinois has now lost population for five consecutive years, with 45,000 residents leaving in the last year alone.

Illinois also has the distinction of being the most taxed state in the country, and it imposes an effective tax rate 38.5 percent higher than the national average, according to WalletHub.

As a lifelong Illinoisan who runs a family-owned manufacturing business, this troubles me. My company, Atlas Tool Works, makes precision metal components for industries like aerospace, medical and telecom. We’re firmly rooted in our community, and we value our employees. We pay the income, property, business and sales taxes that support our state’s schools and infrastructure.

Being a local manufacturer, I’ve had a ringside seat as Illinois’ manufacturing competitiveness has declined. And I’ve seen how our current tax system actually encourages offshoring at the expense of local producers. This shouldn’t be happening, given our state’s lengthy industrial history.

But thanks to a tax system that favors “transfer pricing,” multinational corporations are able to simultaneously park their losses in the United States while shifting profits to tax havens. As a result, companies like AbbVie, John Deere and Amazon essentially pay no income taxes here at all. However, smaller companies like mine have no foreign affiliates, and we can’t simply avoid Illinois taxes.

The 2017 Tax Cuts and Jobs Act did reduce the number of companies that can benefit from overseas loopholes. But it’s still galling to see brazen examples of companies allocating profits in a foreign subsidiary, and facing no tax liability.

The situation could become even more problematic now that Gov. J.B. Pritzker has proposed a corporate income tax of 10.45% — the third-highest in the nation. Pass-through businesses would face an income tax of 9.45%, the fourth-highest in the nation, according to the Tax Foundation. That means an even greater share of the state’s tax burden would fall on domestic manufacturers, while larger corporations continue to dodge Illinois taxes.

A much smarter approach would be the tax legislation being proposed by state Rep. Greg Harris, D-Chicago, (HB2085) and Sen. Heather Steans, D-Chicago, (SB1115). Both are looking to close offshoring loopholes and start taxing multinational corporations on the profits they earn from sales in Illinois. If a company earns profits of $1 million on sales of goods or services in the state of Illinois, then it should be taxed on that $1 million in profits.

Essentially, that means no more tax dodging in Bermuda or the Cayman Islands. And if Illinois ended these tax avoidance strategies, the state could raise $1.3 billion in taxes from multinational corporations that currently sell into Illinois but pay almost no taxes here.

I believe that Illinois already taxes and spends too much. It runs counter to my belief to casually urge more taxation, but Illinois has failed to reform spending and is embarking on a massive tax increase. In the face of such economic uncertainty, I would prefer to see everyone who enjoys access to Illinois’ consumer and business markets pay their fair share. Illinois legislators should consider these bills as a productive first step.

Just like the rest of us, these corporations should pay their fair share in Illinois. If nothing changes, Illinois will continue to subsidize multinational corporations at the expense of local businesses.

Local chambers of commerce should stand up for Illinois businesses and support these efforts to level the playing field and bring fairness to our tax system. This is essential when we face a downward spiral of dwindling population and reduced tax base.

Pictured above with former Gov Bruce Rauner (c) and father Dan Mottl (r) Zach Mottl (l) is the chief alignment officer of Atlas Tool Works and a past chairman of the Technology and Manufacturing Association.