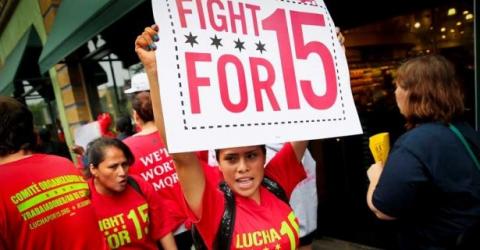 SPRINGFIELD – Illinois lawmakers are preparing to introduce legislation nearly doubling the state’s minimum wage from $8.25 to $15 per hour. While anyone in Illinois would be delighted with a nearly 100 percent pay raise, there are negatives that experts warn could happen if such a dramatic hike were to take place – even spread out over ten years.

Illinois Food Retailers Association issued a statement Monday saying they opposed the minimum wage hike, if it does not include different rates for different regions within the state.

The IFRA asked their members to contact their state lawmakers and “urge them to vote no on any proposal that does not consider regional differences in the final starting wage proposal.”

If supporters are successful, Illinois will be the fourth state to enforce such a wage hike, after California and Massachusetts, whose $15 per hour rate will go into effect in 2022 and 2023. New York’s minimum wage of $12.50 will go into effect in two years, and will incrementally rise to $15,00 five years later.

Opponents of an increase argue that raising the minimum wage would likely result in wages and salaries increasing across the board. Such a hike would increase operating expenses for companies that would then increase the prices of products and services to cover their increased labor costs.

Many economists and business executives say labor is a major cost of doing business, and will be force businesses to cut jobs to maintain profitability. The 2013 CBO report estimates that raising the minimum wage to $10.10 an hour would result in the loss of approximately 500,000 jobs.

Higher minimum wage could result in increased labor market competition for minimum wage jobs, forcing the very people off the workforce that are making progress from the minimum wage level.

The measure is being discussed currently at the Illinois State Capitol. The new governor JB Pritzker has already said he would sign the bill into law. Former Governor Bruce Rauner vetoed a $12 per hour minimum wage last year.