From the military to manufacturing: JR Hommer 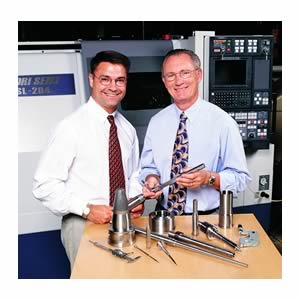 ARLINGTON HEIGHTS – JR Hommer says he’s been in a manufacturing family since he was six years old, and in the industry himself for since 1992. In just the past few years, he’s noticed a marked change in attitude towards manufacturing.

“I’ve been in it for 23 years, and for the first time, it’s cool to be in manufacturing,” he said. “I feel like the wind is at my back. Even the Wall Street Journal wrote recently that precision machining is among the top five opportunities for the future jobs.”

JR, now 43, took over Hommer Tool & Manufacturing when his dad retired in 2000.  Jim Hommer, his dad, attended TMA machinist training in 1965 and worked for 17 years as a moldmaker before he started his own company in 1982 with one employee.

Before coming to Hommer fulltime, JR served in the Marines and went to college for business and operations management.  He also went through the Technology/Manufacturing Association’s Apprenticeship program.

“My dad liked working in the business, and I like working on the business,” JR said. “He built a great reputation and brand at Hommer Tool, so the foundation was there. I just built on that.”

How JR’s father worked on machines was very different from the way things are done at Hommer Tool today, he said.

“My father didn’t make the leap from manual to computer machinery,” JR said.

The elder Hommer often referred to an industry guide from as early as 1898, because up until computers, manufacturing processes hadn’t changed in 100 years. That generation, including JR’s dad, is retired now and, for the most part, appreciates the industry’s technological advances and remembers the way things used to be done.

Today Hommer Tool continues to focus on a niche market that services components and molds that make plastic parts. For instance, one of Hommer’s customers builds the molds that make a tube, and Hommer makes the mold and components that form the thread inside to create a plastic lipstick tube. That’s just one of hundreds of everyday plastic items Hommer helps to create.

The company currently has 45 employees that JR keeps busy.

“The perpetual challenge for what we do is that industry tolerances are getting smaller and the lead times are shorter. At the same time, customers want to pay less money for the work.  “In other words, better quality, lower price and shorter delivery,” JR said.

“The other major challenge besides those is finding human capital,” he said. “After finding the opportunities, getting the work done and acquiring the capital equipment, finding skilled workers is most challenging,” JR said. “Tradesmen are the backbone of the business, they’re highly skilled machinists, and very hard to find.”

JR says when he was young, a liberal arts college was expected for high school graduates. Slowly, high schools and community colleges gutted vocational training  programs and discouraged manufacturing.  He sees that as part of the reason precision machining talent is so rare now.

But financially and realistically, that approach to finding a solid career doesn’t make sense.

Hommer says while many school districts attempt to evaluate student skills, they fall short of the assessments the military does so much better. The typical career path tests mental aptitude, but that’s not enough. When a young person joins the military, they are tested to determine what he or she would do well by assessing the skills and knowledge. Hommer believes the military assessment model should be one the education system emulates to encourage vocations and career aspirations.

Among the rewards of leading a company like Hommer Tool is working on a diverse line of products.

“The fun thing for us is to make 2000 unique details for our 4000 customers – with 300 active accounts. We make ‘snowflake’ components that demand something new every day,” he said.

When Hommer’s not at the business, he’s an avid duck hunter – and features several trophies in his company office.

“I love duck hunting so much, I start with the season in North Dakota and follow the birds as they migrate south,” he said. “I’ll be headed for Arkansas soon for their duck hunting season.”

Hommer says he started hunting during his college days, and now that his son is 16, he has picked up on the passion as well. It provides time for the two of them to get away together.

Will Hommer Tool be passed on to the next generation?

“Well, it was never my father’s thought or intention that I’d be in the business. I think there are positive aspects to thinking that way, versus having an expectation,” JR said.

“I’ve just started thinking about leaving the opportunity open to our son – or daughter. I just don’t know yet.”

But with the attitudes changing towards American manufacturing and it becoming “cool” early in the 21st century, there’s a good chance someone in the family – sooner or later – will find themselves thriving at Hommer Tool.