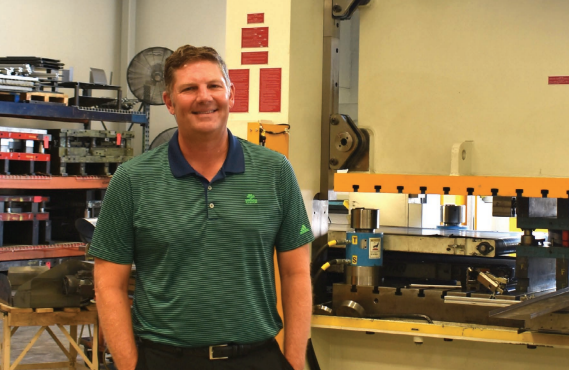 The Morton Grove-based custom metal stamper and manufacturer grew over the last 51 years from a small die shop to a 65,000 square foot facility with 71 employees.

“Companies like Sko-Die need the best people and equipment to succeed,” Steininger said. Sko-Die takes pride in investing in their employees and equipment. They’ve recently added robotics, a grinder and an updated machining center. Four years ago, Sko-Die expanded their Morton Grove facility to house a new 440-ton AIDA press.

Patrick says that while he did spend time at the company growing up, he really enjoyed the summers he spent playing in the woods near his family’s summer home in Haywood, Wisconsin. His home in Elk Grove Illinois backed up to Busse Woods, where he and his friends fished and explored during his childhood years.

When it came time for college, Patrick first pursued studying Forestry at the University of Wisconsin in Stephen’s Point. It wasn’t long before he realized the commitment and connections it would take to make a career in foresting.

“I talked it over with my dad, and decided to change my major to business administration, with a focus on accounting,” Steininger said. “And my dad opened the door for me to Sko-Die.”

In the mid-80s, Patrick spent several years learning the business – working in quality, tooling and purchasing. His father Richard Steininger retired in 2002 and worked his way out of Sko-Die’s front office. At the same time, Patrick became President of Sko-Die. His older son Kyle joined the business recently as a member of the family’s fourth generation.

The company’s future is foremost on Steininger’s mind. He anticipates a lot of growth in the next five years.

“Aerospace is major for Sko-Die, then I’d say power generation, with medical and some consumer related products,” he said. One of Sko-Die’s mainstays is steel brake components for 737s.

That portion of their work puts Sko-Die in the middle of the tariff debate that’s so hot now among metal manufacturers.

“The steel that meets specifications for the parts we make is made only at one German company,” Steininger said.

Steel imports from Germany now have a 25 percent surcharge – an additional cost that someone has to pay.

Steininger’s view is that while tariffs are a new obstacle for the business, it will all work out, just as other challenges have over the years.

Sko-Die’s foremost challenge is like other manufacturers’ in the Chicago area – finding good people to fill their openings. Sko-Die is sending two employees to TMA’s apprenticeship training this year. The company is pleased to subsidize their employees’ career advancements.

“During the time so much U.S. manufacturing went offshore, we lost a whole generation of manufacturers,” Steininger said. “Now we’re having to make up for that time in the years ahead.” That will be the uphill task immediately ahead for Sko-Die and other manufacturers.

In the meantime, handing out bonuses and treating his Sko-Die team to celebrations throughout the year is very rewarding for Steininger.

“That, along with hearing from satisfied customers how we’ve served and helped them,” he said.

Steininger says the people he’s met and the friends he’s made over the years through TMA have made his involvement in the association invaluable. Today he serves on the board of directors of TMA’s 401K Trust and sends key members of his company team to TMA Peer Groups.

“It’s worthwhile to be connected through TMA to keep up with changes going on in the industry,” he said. In the meantime, Sko-Die advances while serving their customers, thriving as a company, and “Open for Business.”