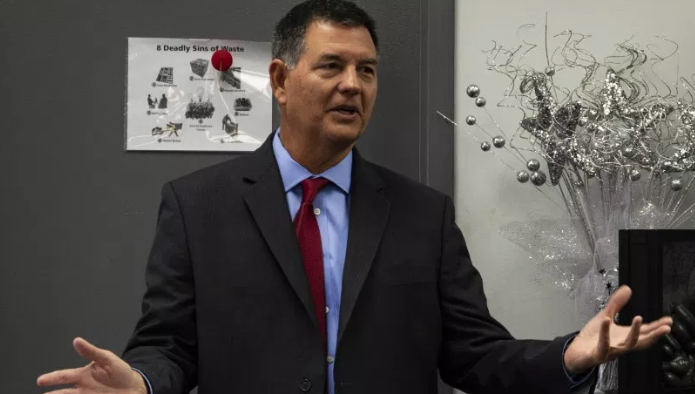 American ingenuity emerges more often than not when a problem needs a solution. Case in point: Innovative Components, Inc. started 23 years ago when founder Mike O’Connor faced a frustrating issue with his lawnmower.

“As a young single guy, I didn’t cut my grass too often. One day when I got into the really high grass, my lawnmower started vibrating and one of the two knobs halfway down the handlebar fell off, into the high grass,” O’Connor told TMA News Bulletin during a recent visit.

O’Connor said he searched and searched for the lost knob, but didn’t find it until soon after, when he ran over the knob, ruining it and the lawnmower blade.

It was then that a thought crossed his mind that led to a new product and a new business: “Why can’t they make plastic knobs that don’t vibrate loose on lawnmowers?”

O’Connor’s next thought was, “Wait a minute, we make things that go on helicopters and fighter jets that vibrate and don’t fall loose. Of course we can make knobs that don’t fall off lawnmowers. No one’s thought of it yet!”

O’Connor went back to work and in about five minutes with the help of an engineer, came up a design that worked.

Within nine months, the knobs reached one million in sales, and soon after, O’Connor launched Innovative Components, Inc., a company that now makes millions of lawn and garden tool parts.

“That’s a lot of knobs,” O’Connor said. “We simply used technology in the defense industry and applied it to lawnmowers. Today, as far as we know, we’re the number one manufacturer of plastic knobs in North America.”

Before starting the now 100-employee company, O’Connor graduated from Notre Dame with a business degree and then earned an MBA from the University of Chicago. He grew up in Elkhart, Indiana, where his father owned and ran a mobile home manufacturing company.

“Every kid in my high school that I hung out with had a dad that worked in manufacturing, and most of them ran the companies,” he said. “I was naturally drawn to starting my own company.”

O’Connor started Innovative Components in 1992, sharing a space in Long Grove, Illinois with a tool & die maker, before moving to Arlington Heights and finally, Schaumburg 20 years ago. Innovative Components’ current facility is 25,000 square feet, with another location purchased ten years ago in Costa Rica.

“We were looking to reduce labor costs, and I didn’t want to do what everyone else was doing – at the time, sending work to China,” O’Connor said.

“I found a country that had about 98 percent literacy, free education, free health care. Labor unions are against the law. Ownership of property is virtually identical to the United States. Central time zone, and two days from Miami by boat for short lead times,” he said. “And virtually everybody under the age of 25 speaks English. Yet labor rates are similar to China.”

Another change over the years is that Innovative Components is nearly completely green, environmentally friendly. Almost all of their products are made with polypropylene made from recycled plastic parts, including automotive battery casings. Recycling companies grind the parts up into small flakes and use a process that creates purified pellets nearly identical to newly-created pellets.

“But we’re saving the scrap plastic from landfills, and the materials cost less that gives us a competitive advantage,” O’Connor said. “When we first started, recycled material was very difficult to use. It wasn’t consistent, had impurities and we had to design our tooling in proprietary ways to take advantage of the materials.”

“We’re definitely in the Golden Age of manufacturing now, our productivity is just so high,” O’Connor said. The United States is the world leader in petroleum-based products and plastics manufacturing is at high levels – leading to re-sourcing, especially of small-lot orders with lower levels of inventories.

As with most manufacturers, O’Connor says the future holds challenges of keeping up with technology advances and finding people trained to handle those changes.

Innovative Components hosts an intern program for high schoolers and an apprentice program with Harper College for college-age students, which is augmented by TMA courses.

Innovative Components is located at 1050 National Parkway in Schaumburg and on the web at www.knobsource.com.