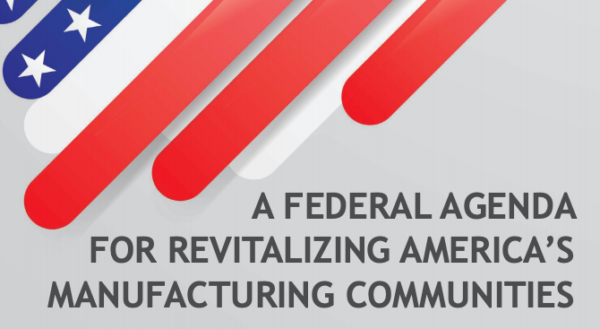 Despite the flaming hot economy at the national level, the US Midwest continues the struggle to regain good paying manufacturing jobs.

From 2000 to 2010, the states of Indiana, Illinois, Michigan, Ohio, Pennsylvania, and Wisconsin lost a combined 1.8 million manufacturing jobs. In the past eight years, nearly 500,000 manufacturing opportunities returned to those same six states.

Still there’s much to be done to regain what was lost. And in order to do that successfully, there needs to be a plan. That’s why The Joyce Foundation funded a study that led to a report published by The Century Foundation’s Bernard L. Schwartz Rediscovering Government Initiative.

The researchers of The High Wage America Project studied and toured Pittsburgh, Cleveland and Chicago. Their efforts led to a $2 billion, 12-point action plan they suggest could revitalize good-paying manufacturing jobs and industrial heartland communities.

Over the past twelve months, High Wage America Project experts listened to and learned from political, academic, business, labor, and community leaders at the forefront of efforts to build a high wage regional economy. In each location, they partnered with local groups to research the state of manufacturing in that region, as well as its continuing impact on workers and communities.

The ongoing debates in Washington, D.C. are largely limited to the topics of trade and tariffs, the researchers said, and neglect to focus on strategies to support and scale efforts to bolster the competitiveness of manufacturing clusters and resilience of manufacturing communities.

TMA News Bulletin spoke with Andrew Stettner, one of the authors of “A Federal Agenda for Revitalizing America’s Manufacturing Communities” and asked him what they found when they spoke with and visited Chicago manufacturers.

Chicago has a larger manufacturing sector that has need of significant scale as far as recruiting a new generation of workers, Stettner said.

“That need gives room for some larger scale interventions,” he said. “There are not just a few hundred workers that are needed in the Chicago area, but more in the several thousands. That gives good opportunities for bigger interventions such as apprenticeships and the community college level.”

Stettner said the Chicago area manufacturers were advanced in recognizing the possibilities of tapping areas with chronic high levels of unemployment as potential sources for future manufacturers.

“Chicago area manufacturers have recognized potential talent and opportunity in those areas, and are ahead of others setting up exemplary training programs,” Stettner said.

The most notable challenge Chicago manufacturers face, the panel found, is the distance between where the manufacturing career opportunities are and where potential workers live. That leaves transportation as an important obstacle to overcome.

The report itself spells out what Chicago area manufacturers know all too well:

After bearing the brunt of the largest drop in manufacturing in U.S. history from 2000–2010, manufacturers in the heartland are coming back—so much so that their growth is outstripping their ability to find labor for all the new positions.

The group’s research found that over the past year there were two manufacturing job openings for every person hired in the Chicago region. Even in an economically diversified metropolis such as Chicago, manufacturing offered more job openings than all but three sectors— including 15,000 unfilled frontline production jobs that rarely require a college degree.

It’s a major endeavor: the elements of the education and workforce system that addressed the industrial workforce in the past—including vocational high schools and apprenticeships—have been allowed to wither for decades.

For example, the most recently available data, from 2013, shows that in that year Chicago Public Schools had trained only 118 young people to industry-recognized credentials in manufacturing, in part because educational systems had turned away from manufacturing to focus more exclusively on other high-growth occupations.

These factors were the basis for the first two of 12 recommendations the panel made: 1. That the federal government should provide grants for career-based K–12 programs targeting manufacturing, and 2. That manufacturing apprenticeships should double in five years and building the infrastructure for sector-based education and training. 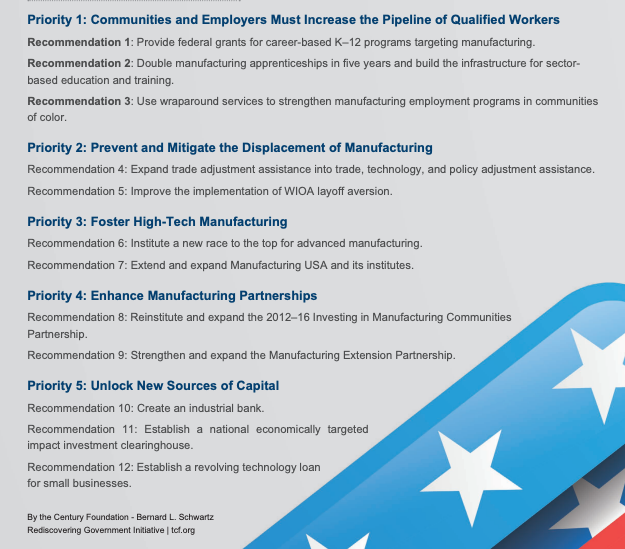 TMA Video: Moldmaker, Machinist, Metrologist: Could these be careers for you?
TMA Media Nov 12

TMA Video: Moldmaker, Machinist, Metrologist: Could these be careers for you?