Why TMA presented Gov Rauner with the “Defender of Manufacturing” Award

TMA President Steve Rauschenberger explained in a moving message with 130 TMA members the reasons why the organization presented Illinois Governor Bruce Rauner with the “Defender of Manufacturing” award during his visit last Friday morning.

Rauschenberger, who retired from the Illinois Senate in 2007 where he served as chairman of the all-important Appropriations Committee, said:

In fact, as recently as 2002, Illinois had a balanced budget, no recognized backlog of unpaid bills, was working on a 30 day payment cycle, and the state pension system, after 7 disciplined years of funding reform had a funded ration approaching 80%…..

Throughout the decade of the 1990s, Illinois was ranked in the top 15 states for business growth, and with a 3% income tax was considered a moderate tax state…  During that decade Illinois had partisan balance, with the Senate held by the Republicans, and the House controlled by the Democrats.

What happened?  In the 2002 election, the Democratic Party led by Mike Madigan ran the table, electing Rod Blagojevich governor and winning majorities in both the House and the Senate.

The first major act of the Democratic leaders was to expand Medicaid and suspend payments to the pensions. They privately admitted their goal was to spend Illinois into a tax increase so that they could expand government.

Twelve years of feckless budget governance, pension underfunding, and unbalanced budgets brings us to 2012.  Illinois is a mess….

The Illinois Republican Party locked out of budget negotiations, in the minority in both chambers of the Legislature, is facing a leadership crisis.  They have no recognized leader, no money on hand, and low morale.

Bruce Rauner also stood up for pension reform and a return to balanced budgets.  He called for spending cuts and program growth restraints and budget reform without a tax increase. Governor Rauner searched nationwide for new cabinet members and agency heads with experience in other states that were succeeding. Governor Rauner refused a salary and spent his own money to help restore the Illinois Governor’s mansion.

How did the legislative leaders receive these new leadership initiatives?

Work Comp reform: a flat no.

Pension reform: Not on their watch, except for a watered down version rejected by the Democratic majority (and pension participants themselves) Supreme Court.

New cabinet and agency leadership: delayed appointments, ridicule in hearings and grousing about their salaries.

The last four years we have witnessed the most anti-business legislature in my lifetime. The current legislative leaders have no respect for employers, job creators, business people and manufacturers.  They see them as sheep to be shorn, people to be exploited, interests to be bullied.

These last four years, when employers and manufacturer voices were locked out of the legislative process, there was only one appeal to common sense, one place for the interests of TMA and your employees to be heard: that place was Governor Bruce Rauner’s office.

More than 20 times, the Governor stood alone against the Speaker and the Senate President vetoed legislation passed by both chambers that would have hurt employment and employers in Illinois. 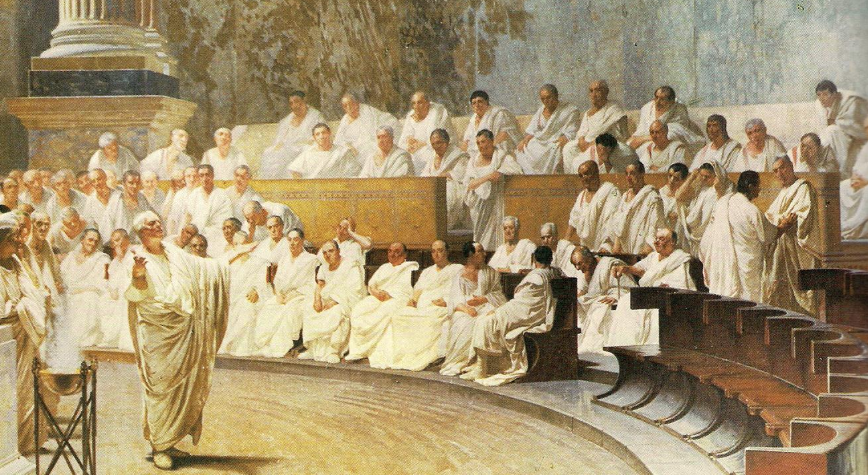 The history of the veto goes back to the Roman republic.  Rome was ruled by the Patrician class (think the modern political class).  The work of Rome was done by the Plebian class, they were the tradesmen, the craftsmen, the farmers, and the builders…  The Plebian class was only allowed to elect two Tribunes to represent their interests…  These Tribunes intervened to protect the Plebian class…  And their most important power was the power to “set aside” an action of the Senate that was not in the interest of the majority of Roman people.

When they exercised this power, the would rise up in the Senate and shout “I forbid!.”  The Latin phrase for “I forbid!” is “Veto.”

This morning TMA recognizes a man who has been a Tribune of the People. A man with nothing to gain personally from political office.

A man willing to propose bold solutions, suffer the rejection and ridicule of the political power brokers, and when called upon to stand in the interests’ employees, employers, taxpayers, and the politically unconnected and shout, “I forbid!.”

This morning we honor Illinois Governor Bruce Rauner as a Champion and Defender of Manufacturing.

As a symbol of this recognition, we want to present you with this mounted cannon. This cannon was crafted in the TMA Training Center to your left.  Cannons like these are the capstone project of TMA’s venerated 3 year Apprentice Training program.

Governor Rauner on behalf of TMA, please accept this award.