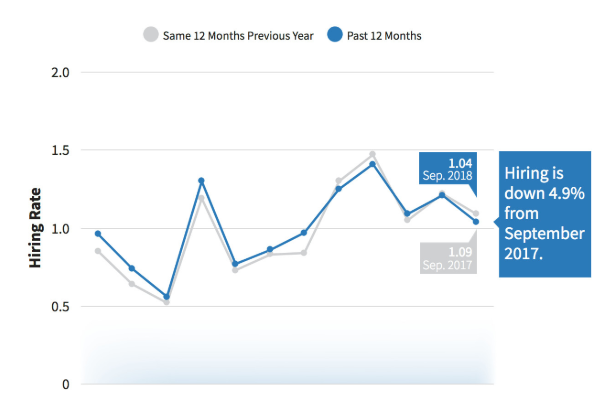 LinkedIn’s Workforce Report for Chicago for the month of October 2018 shows hiring down 4.9% in September 2018 as compared to September 2017. Seasonally-adjusted hiring ( which removes predictable seasonal hiring variations) was 0.3% lower in September than August.

LinkedIn’s “Hiring Rate” is the percentage of LinkedIn members in Chicago that added a new employer to their profile in the same month the new job began, divided by the total number of LinkedIn members in the U.S. By only analyzing the timeliest data, we can make accurate month-to-month comparisons and account for any potential lags in members’ updating their profiles. This number is indexed to the average month in 2015-2016, for example, an index of 1.05 indicates a hiring rate that is 5% higher than the average month in 2015-2016.