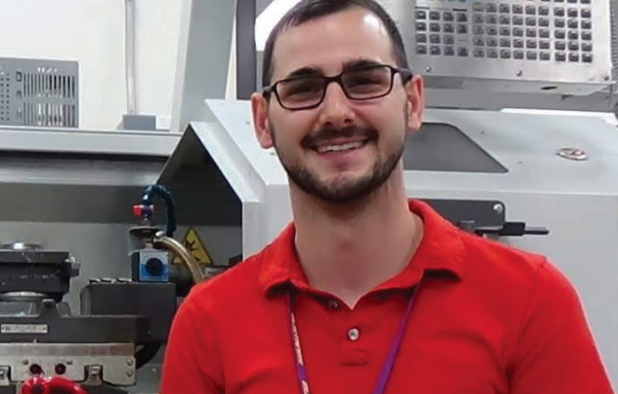 Over the past six years, Rolling Meadows High School’s Technical Education Department has grown exponentially – from 16 students in 2012 to 200 in 2018.

Curious about this growth, TMA went to Rolling Meadows Technical Education teacher Anthony Genovese and asked him what the secret is.

“The role of a manufacturing educator is not only to teach skills, but also to get new generations excited – light that fire – to create growth like this,” Genovese said.

He laid out his 5-point approach to help stir interest in manufacturing among high schoolers.

“Our district holds an introduction for incoming freshman night, and we took advantage of the opportunity by displaying 3D printers, blueprints, printed parts and exploded models,” Genovese said. “That got the students’ attention.”

As a part of the class curriculum, Genovese had his students create housing for USB chip projects – allowing them to learn caliper reading, tolerancing, understanding manufacturing floor design, and creating designs they could successfully print.

“When those plans began circulating around school, it caught on, and created a buzz,” he said. “Kids like to build, to be active, to use their skills. We focus what we’re studying around the projects – engaging, real life projects.”

Genovese and his colleagues also took advantage of the current battling robots rage to start an after-school activity building robots for competition with other area robotics clubs. “We encouraged them to work together to build teamwork and learn what would work and what didn’t,” Genovese said.

4. Reach out to potential students early, during 7th – 8th grades

Genovese and a colleague started an after-school experience for what they called “Next Generation Engineers” to help them get acquainted with the classes, the teachers, the school and the department’s set up. “We reached out to feeder schools and found the program worked well,” he said.

And, equally important, Genovese said, is changing parents’ perception of manufacturing careers. That emphasis was a major factor in how Genovese proposed the renovation of the department’s classrooms be set up. “We had to make sure it did not appear dirty, dark or dingy,” he said.

Genovese’s own interest in manufacturing started when he studied industrial arts at East Leyden High School from 2001 to 2003 with instructor Steve Lasner. While at East Leyden, Genovese competed in TMA’s Precision Machining Competition every year, winning first place in one category.

After 10 years of teaching, Genovese says he enjoys it most when one of his students shows him a job offer letter from a local manufacturer.

Genovese says the program’s overall success at Rolling Meadows starts at the top, with school principal Eileen Hart and department head Dave Wietrzak. “Their emphasis is preparing students for life and careers, and helping them find what’s best for each one of them,” Genovese said. “It’s a never-ending job, and one that is rewarding.”

And most certainly, while Genovese might not say it himself, a successful program like Rolling Meadows’ must have a leader passionate about manufacturing and his or her students’ futures.

Follow Anthony Genovese’s Tweets about his department @RM_Engineering and view excerpts of TMA’s interview with him on TMA’s YouTube channel.