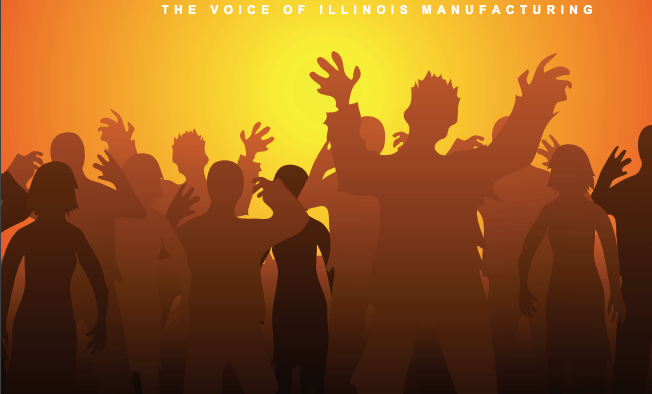 There is a “Walking Dead” syndrome in high schools and on college campuses that is preventing America’s youth from finding rewarding, lucrative careers. The deteriorating condition is spreading to slow down the nation’s economy as available jobs begin to outnumber available trained personnel.

That’s how National Institute of Metalworking Skills Executive Director Montez King and Technology & Manufacturing Association President Steve Rauschenberger see the workforce situation, they said in an op-ed piece penned together to run in Chicago area newspapers in light of this year’s TMA graduation.

“Of course, we’re not talking about real flesh-eating zombies wandering the halls of our institutions of learning,” King and Rauschenberger explained. “We’re talking about students that are going through the motions of a traditional education system that doesn’t prepare them for exciting futures.”

“Guess what,” he told them, “You guys are survivors from all the zombies out there in the room. Just like in the ‘Walking Dead’ tv series, you’re survivors trying to find shelter and seclusion from the zombies. The zombies are walking around groaning, looking to eat your flesh.”

And as in the drama, there’s always a victim, King said, and the zombies focus on slow-draining him or her.

“If you’re the machinists, the toolmakers, you have what it takes to survive in a world of Walking Dead,” King said. “You need to know what lies ahead.”

Only 16 percent of all high school seniors are interested in trades careers like those the TMA graduates are entering, he said. More than 50% of all jobs in the workforce require a high school diploma and less than a four year degree, and in most cases, those jobs with skills offer better pay than college-required careers.

Unfortunately, the majority of today’s students are not aware of other education alternatives that can provide successful, debt-free, and rewarding careers, King and Rauschenberger wrote in the op-ed.

“Our economy is rapidly evolving and the jobs of today and tomorrow require a hybrid style of training and education for a qualified workforce in the future,” they wrote.

Currently, most students graduate from college without the skill set or experience required to be successful in most industries, especially manufacturing.

Over the next decade, 3.5 million manufacturing jobs will need to be filled in America. The horrifying reality is that two million of those jobs are expected to go unfilled because of the workforce’s lack of needed skills. Furthermore, there are 5.5 million disconnected young people currently out of school and not working.

As a result, exciting opportunities exist for today’s informed youth.

The 51 TMA graduates this year are stepping into full-time, lucrative jobs with no debt and incredible career potential, King and Rauschenberger wrote. An effort to turn the tide on the devastating Walking Dead syndrome needs to be stepped up.

“We need more young people, along with their parents and educators, to have open minds when it comes to manufacturing careers. It’s been longer than we care to acknowledge since we were kids, but if you were to tell us that we could make over $100,000 with a STEM education, we could have avoided thousands of dollars in student loan debt, and wouldn’t have to wear a suit to work – that would have undoubtedly spiked our interest,” the two went on.

“With every TMA and NIMS training and graduation, we’re raising awareness of the significant benefits of a manufacturing career. We must stay the course and keep engaging the next generation of manufacturing,” King and Rauschenberger said.

“We as Americans have a lot to gain from an alive and thriving manufacturing industry,” they wrote – and that is how to destroy the devastating Walking Dead syndrome.