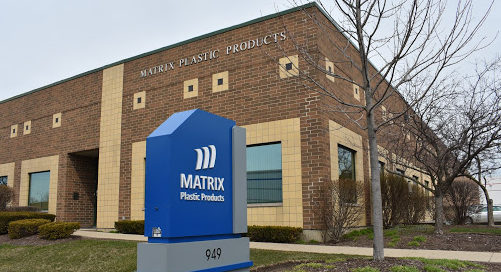 One thing a person doesn’t want to worry about when facing surgery is just how dependable the tiny surgical instrument parts the doctors use really are.

Paul Ziegenhorn and over a dozen members of the Ziegenhorn Family are in their 40th year of serving the ever-changing medical industry – and keeping up with the instrumental advances surgeons need to help their patients. 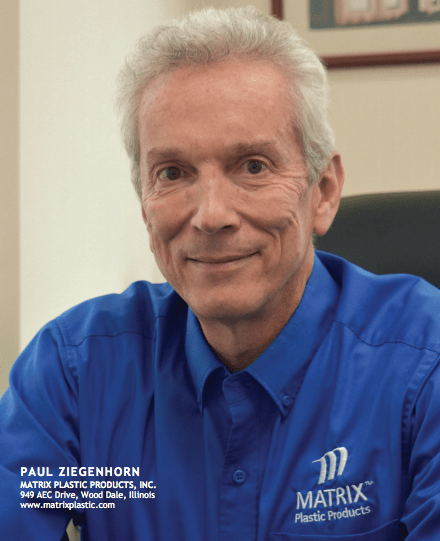 Paul was 25 years old when he and his brother Jim combined resources to start a tooling business building on their father’s engraving expertise. This month Paul will retire as president of Matrix Plastic Products, entrusting the company’s future to other members of his family.

“We started implementing the transition plan over ten years ago,” he told TMA News Bulletin.

Two of Paul and his wife Mary’s three sons are ready to take on the company’s leadership mantle, while Ziegenhorn family members continue building the business. Paul’s son Andy will take the reins as president & CEO, and Paul’s brother, Mark, will continue as CFO, a role he has held since 1999.

Matrix Plastic Products is a “phenomenal example of what a family can do when they work together,” TMA colleague John Winzeler said when he presented Paul the Winzeler Award at TMA’s 2018 annual dinner.

The company has just undergone a re-branding effort that reflects Matrix’s products and services evolution. Matrix began as “Matrix Tooling”, a plastic moldmaking business. But as they grew, their OEM customers pushed them to test and sample the molds they designed and built. That led to the company adding sampling presses.

“With the addition of sampling presses, we started a production business that is 85 to 90 percent of our sales now,” Paul said.

The business is now known as Matrix Plastic Products and their primary focus is close tolerance parts used in the medical field. Matrix is going through a busy period, Paul said, so much so, the 90 employee company’s 30,000 square foot building in Wood Dale, Illinois is getting crowded.

“We started making parts for robotic surgeries in 2000,” Paul said. “We make a lot of end-of-arm tools that do cauterizing and stapling during surgeries. We make surgical implants that are treated with steroids – things that go inside the body and stay in there. We mold those parts in our cleanroom.”

Clients that design life-affecting instruments like those demand high standards that must pass stringent FDA requirements. “It’s difficult to land those customers, but if you do, it’s unlikely you’ll be underbid,” Paul said.

Things are much different now than they were in 1978, but one thing that has always been a challenge at Matrix will likely continue to be in the years ahead, he said. There will continue to be a need for qualified workers. With that in mind, Matrix consistently works to bring on apprentices and a stream of younger workers to replace the aging workforce.

“I think we have an opportunity to sell manufacturing careers,” Paul said. “It is crucial that we keep pushing them.”

The Ziegenhorns not only talk about the next generation of manufacturers, they lived it in May when Paul’s brother Mark’s son John graduated from TMA’s Related Theory Moldmaking program. John, who graduated in 2014 from Bradley University with a degree in chemistry, chose to delve more into mold making and stay with the family business.

“John’s been an amazing addition to Matrix, and one of the key building blocks for our next generation of management at Matrix Plastic Products,” Paul said.

Much of Matrix’s ongoing success is due to the diversity of people – both family members, as well many who aren’t – who work well together, Paul said.

“Coming from a family with nine children affects how you view the world and handle business,” he said. “Everyone has different abilities, and we’ve found that when we encourage people to do what they like to do, they excel. That makes this a great place to work.”

Paul served as TMA’s Chairman of the Board in 2011, a time when the organization’s leadership was undergoing change. “But while the work was a challenge, I was really grateful for the help the chairmen before and after me were. It made the changes much easier to navigate,” he said.

As Paul steps into retirement this month, he plans to travel more with his wife Mary, enjoy his grandkids, do more gardening and play a little more golf.

But he’ll also continue doing what he likes to do: encouraging the next generation to consider careers in manufacturing, while standing alongside proudly as Matrix Plastic Products continues to have a part in making the world a healthier and better place to live.

IL manufacturer to Trump: Thanks for “Enough is enough” approach on trade
TMA Media Jul 09