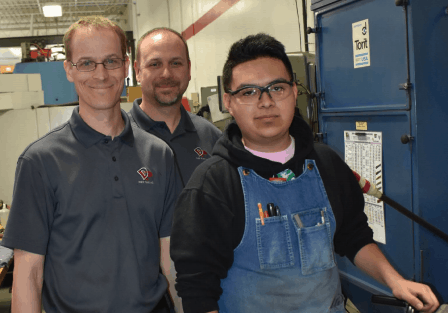 Last year, Cristian Arguello won among his high school peers in Technology & Manufacturing Association’s (TMA) Precision Machining Competition. This year, he is continuing to learn and his new employer is paying for it.

It’s a path more and more high school seniors are pursuing – interesting, pertinent careers that challenge and spare them a future of paying off burdensome school debt.

“I know that most people my age don’t think about an option besides college and getting a regular degree,” Cristian said. “When Otto Engineering visited my machine shop class, they said there was a shortage of people entering the trade, and they wanted to put more to work.”

The opportunity arose after Cristian decided to take machine shop at Streamwood High School. His brother and a friend recommended a program he knew little about – the school’s Applied Education program. Learning about how parts he used every day piqued his interest in metalworking.

“Until I began understanding how parts are made, I never thought about it much. Now I look at things differently – it sure has opened my eyes to a lot of things,” he said.

Soon after Otto Engineering visited Cristian’s high school class, he went to visit Otto Engineering’s Carpentersville facility. Cristian said he was pleasantly surprised at what he found there – it wasn’t the dark, dirty shop he expected it to be.

“My first thought was that it was one of the cleanest, biggest, most organized shops I’d ever seen,” he said. When Otto offered Cristian a head start on a career and three years of paid-for classes to advance his training, he jumped on it.

Now Cristian is learning water grinding at Otto Engineering’s new acquisition Dies Plus in Itasca, after finishing his first year of studying basic math and blueprint reading at TMA’s Education Center in Schaumburg, Illinois. In three years, he could have national certification as a tool & die maker, making an above average wage with skills in high demand.

Cristian’s boss Neil Dohe says that it’s not easy to find those just starting in the industry like Cristian that have good attitudes and willingness to learn. “We’re glad Cristian joined us here a Dies Plus. He’s a quick learner and has great potential.”

Cristian was one in Streamwood High School’s machine shop class that entered TMA’s annual 2017 Precision Machining Competition. He placed first in Division 3 – Surface Gauge. It was his second year of competing.

“TMA’s competition is a fun way to show off the projects you’ve been working on all year,” Cristian said.

This year, TMA had over 240 students participant in their Precision Machining Competition on May 10th.

This year’s awards ceremony was held at Mazak’s Headquarters in Schaumburg.