LYONS – Atlas Tool Works will soon be celebrating its 100-year anniversary, and the fourth generation of Mottls is focused on the company’s future.

Since its founding in 1918, Atlas Tool Works – like all longtime family-owned companies – has been through good and bad times.

But the Lyons-based precision manufacturing company that employs more than 70 is thriving in 2016 with high hopes for a second century. 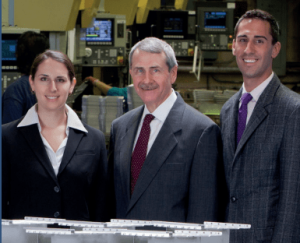 Sixteen years ago, the outlook wasn’t so sunny for Atlas. It was the year 2000, the telecom bubble had just burst, and Atlas’ work was suddenly cut in half.

“It was the first year I was here fulltime,” Zach said. “I had just graduated from college, and was wondering what I had gotten myself into. That year was a wakeup call for manufacturing. The world changed for many of us.”

At the time, 90 percent of Atlas’ work was in the telecommunications industry – work that started when Jerome Mottl and several colleagues left Western Electric to start their own company.

“Atlas grew up with the telecom industry,” Zach said. “We first started making housings and components for mechanical phone switches. Then they became electronic and now the switches use fiber optics. We’ve made them all over the years.”

Jerome Mottl, who was trained in tooling in Austria and Germany, became Atlas’ sole owner in the early 1920s after buying out the company’s co-founders.

His two sons inherited the business from their father. One of those sons – Irvin – died at age 53, when his only son was 18 years old. Irvin’s widow Rose stepped into the business as vice-president to protect her son Dan’s interest until he was ready to join the family business.

As a woman in the 1970s leading a manufacturing business, Rose Mottl became a source of inspiration to women who found themselves in especially challenging situations like hers. TMA’s annual Rose Mottl Award is in honor of her.

Rose also inspired her grandchildren – Zach, Hilary and Althea. “Much of my grandmother’s motivation was fear – for her son and herself,” Zach said. “When she’d get frustrated and be tempted to quit, she’s say, ‘That’s not what Irv would want me to do. I can’t just bury my head in the sand.’” “I think of that often,” says Zach.

Zach’s father, Dan – Rose and Irvin’s son – assumed the company’s presidency and fifty percent ownership in 1989. It wasn’t until 2015 that Dan and his children negotiated buying the other half of the business from the remaining family members.

“The buyout process was a really hard time for me,” Zach said. “But it was also a good time, because when the deal was done, we were able to make decisions right away that had a positive impact on the company.”

While Dan Mottl presides over the company, Zach is serving as Atlas’ Chief Alignment Officer. Daughter Hilary is a mechanical engineer that works directly with the shop, while daughter Althea oversees human resources and fills in where needed.

“The three of us each have our own sandbox, our own responsibilities and talents, so we really complement and respect each other without getting in each other’s way,” Zach said. “It works well for us.”

Out of necessity, Atlas shifted its focus away from the telecom industry toward opportunities where they saw manufacturing need and potential growth – in aerospace, defense and medical technology. The shift demanded investment in the right equipment and the right team members.

Althea Mottl added, “The skills gap and generation gap where we have highly-skilled technical team members bumping up against retirement age and a lack of trained, next-generation workers ready to fill those positions is the headwind limiting our growth. Our close partnership with TMA has helped, thanks to their extensive training resources and the pipeline of new, raw talent they are developing. That’s how we will fill our needs for Atlas’ future.”

Hilary Mottl Schemmer is crucial in directing those needs on Atlas’ shop floor. As a child, Hilary says she loved math, joking that, “differential equations were like my dessert after finishing all my other homework.” Mechanical engineering was a natural field of study for her.

Hilary accepted an offer from Caterpillar after graduating from the University of Illinois-Chicago as valedictorian for the 2005 mechanical engineering class. After a few successful years at Caterpillar, Hilary decided it was time to bring her experience to the family business. CAT did their best to retain her, but she felt ready to leave the big-company mentality behind and be part of the family business where she could have more impact.

Both women are following their grandmother Rose’s example, Hilary juggles her work at Atlas with being a wife and mother to two little ones – a toddler daughter and a newborn son – while Althea also balances work and family with a daughter and son in elementary school – the Mottls’ fifth generation.

“You could be negative and say it’s really hard to be in business, I’m going to shut the doors and go home. Me? I say, ‘Look, we’ve been around 100 years, we’re going to be here for at least another 100,’” Zach said, smiling.

“We’re going to find the opportunities that we’re going to be successful at – that’s how I look at it,” he continued – something one could imagine hearing his Grandmother Mottl say.

There’s no doubt the first and second generation of Mottls would be proud.