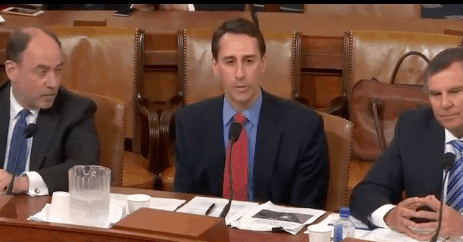 WASHINGTON DC – TMA member Zach Mottl reviewed how tax reform is helping his company Atlas Toolworks based in Lyons, IL grow with the US House Committee on Ways and Means on May 16, 2018. Mottl, who also serves as chairman of TMA’s Government Relations Committee, told the committee his company’s orders in 2018’s first quarter are exceeding orders for the whole year of 2017. His oral testimony:

Mr. Chairman, Ranking Member Neal, and members of the committee, my name is Zach Mottl. I’m the Chief Alignment Officer for Atlas Tool Works, a fourth‐generation, family‐owned, small manufacturer in Lyons, Illinois. We are celebrating 100 years in business and employ around 80 people. We produce precision parts and components for many markets including:

Aerospace and defense, medical devices, telecom and electronics, and industrial products. I’m here representing not only my own companies but also the more than 750 manufacturers who are members of the Technology and Manufacturing Association (TMA) in Illinois and the four million members of the Coalition for a Prosperous America (CPA).

It’s great to be back in this room giving testimony exactly a year later- we have returned to the scene of the crime- but this caper has a happy ending now that the tax package was passed last December. All joking aside, the Tax Cuts and Jobs Act is very helpful for Atlas and my families’ 3 other companies. Congress did a great job and there is now a perception that the United States is once again “open for business.”

As a whole, my business entities will see a tax decrease that can and will be reinvested in our future and our team. However, it’s more complex than that. Our smaller C-corp, whose sales are less than $1 million annually, but profitable—with some Net Operating Losses (NOL’s) on the books—will see no tax change. If we didn’t have those losses on the books, or they were from restricted years, we would actually see a slight tax increase. That is because of the repeal of the Domestic Production Activities Deduction (DPAD) in relation to the size of the business and what we do.

For Atlas, a C-corp whose sales are close to $9 million and now profitable, but also with NOL’s on the books, we would see no tax change. However, I expect to realize a significant tax decrease in coming years as the NOL’s are exhausted.

Accushim, an S-Corp that produces and distributes precision shims, and Two of Us LLC, our real estate holding company, both operate as pass-through businesses. Accushim generated a small loss in 2017 due to one-time costs, but we expect profits in 2018 and beyond. That is when the benefits of the new tax law on pass-through income will start to be realized at Accushim. As far as the real estate company, we are still a bit unsure because it all comes down to the Qualified Business Income Deduction (QBI) rules.

I should mention that the accountants I spoke with do not know exactly how the tax law will impact many clients. Until there is clear guidance from the IRS, they will not take risks.

One extremely positive change of the tax law is the accelerated expensing for capital investments. This past December, my company spent nearly a quarter million dollars on new equipment. Early this year, we invested in a new compressor. This is the equivalent of a heart transplant on a human but now we have a much more energy-efficient and reliable “heart” pumping and keeping all the machines humming and producing parts. The 100 percent expensing of these investments made the difference in buying now versus waiting longer.

However, to me, the really big news is that we’re now seeing increased demand for our products, many of which go into capital projects at large companies. This leads me to believe that reductions in the corporate tax rate are helping larger firms, which drives increased demand from smaller companies like mine.

While tax reform is helping to drive increased US Manufacturing demand, Congress has a good opportunity to do even more. Nearly all countries use a consumption tax system—in the form of a “Value Added Tax” or “Goods and Services Tax”. Foreign VAT taxes average 17 percent and remain in place even when tariffs are dropped. This makes it hard for companies like mine to be export competitive. I would strongly encourage the Committee to consider a goods and services tax to make American production more globally competitive.

Domestic manufacturers would also benefit if corporate taxation were based upon destination of sale. The Tax Cuts and Jobs Act made strides toward territoriality, elimination of offshoring incentives, and addressing tax haven abuse. But profit-shifting still allows multinational corporations to evade taxation on the basis of where their net income “lands” rather than where their gross income originates. With a destination-based system, the US tax base for corporations would be calculated on the share of worldwide sales destined for customers in the United States.

Additionally, the US dollar remains overvalued, driving America’s massive trade deficit. An overpriced dollar is the result of excessive capital inflows, and some in Congress are now considering a Market Access Charge (MAC) to moderate the demand for dollar-denominated assets and help maintain a trade-balancing equilibrium dollar price.

Overall, I want to stress the importance of how US small businesses are part of the supply chain with larger businesses. We create the majority of jobs in the US that provide the real wealth of the nation. These are the jobs that sustain your constituents. My family and I put our time and treasure into our businesses, and we care about our workers and the values that our company promotes. Small manufacturers work to be inclusive of everyone and we try to invest our money in training the next generation for a better tomorrow. Anything Congress can do, like tax reform, to drive demand in the domestic supply chain is important. With your help, we can build on the success of the Tax Cuts and Jobs Act and bring even more growth to American businesses and workers.

Thank you for the opportunity to provide this input. I look forward to your questions.