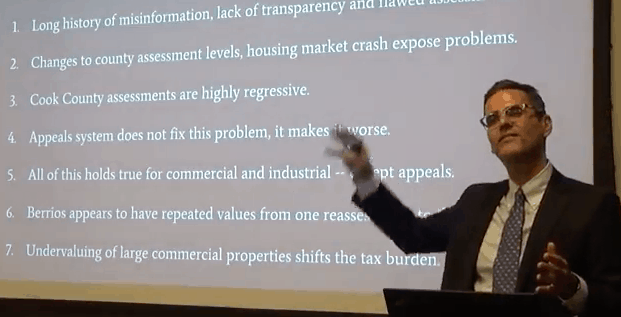 Grotto pointed to Cook County Assessor Joe Berrios‘ office assessment practices as less than transparent and in some cases, shoddy.  Berrios’ lost re-election to his countywide office in the 2018 Democrat Party primaries.

This week, Grotto was awarded the Richard H. Driehaus Foundation Award for Investigative Reporting for his controversial “The Tax Divide” series.

Led by reporter Jason Grotto, the series shed light on a complex, specialized issue, but one of deep concern for many Chicago residents: property taxes. For decades, Cook County residents had suspected their property taxes were based on inaccurate assessments, overvaluing many low-priced homes while undervaluing many higher priced ones. But few reporters had the technical and analytical ability to prove there were problems.

A few of Grotto’s insights were captured in TMA’s video below: