America’s Future is in … Shop Class 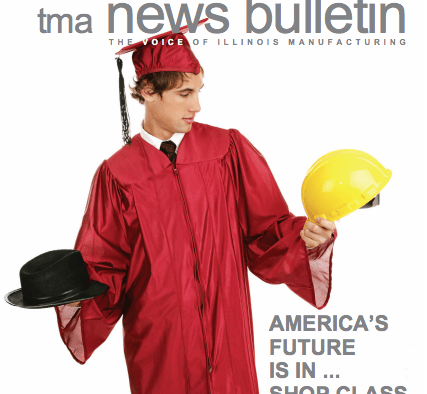 It’s time for marketing geniuses to focus on re-branding high school shop classes in the minds of American students and parents. Why? Because the nation’s economic future depends on the next generation of manufacturers.

A recent Chicago Sun-Times opinion editorial expressed concern about students that would clearly be more satisfied and fulfilled in professions that do not require college degrees.

College of DuPage professor David McGrath’s powerful comments titled “Let’s quit brainwashing kids that it’s a college degree or nothing” called for solutions for this substantial number of students, not excuses.

“We need to debunk the inference made by parents that vocational and technical jobs are inferior,” McGrath wrote. “Such a notion has led many of them to steer youngsters unwilling or unsuited for academic study into frustration, failure and depression.”

A campaign of public relations, parental education and cash is needed to combat the stigma of careers that do not require college education, he said.

McGrath’s op-ed was welcomed and cheered on by those linked into the Technology & Manufacturing Association’s newly-energized Facebook page. The commentary was shared, liked and viewed by over 14,000 – a new record for TMA’s emerging online presence.

The professor is not alone in his worldview. His thoughts are echoed by nationally-prominent spokespersons like Dirty Jobs’ TV show host Mike Rowe.

“I think a generation of parents wanted something better for their kids, but we didn’t know what ‘better’ meant,” Rowe said in an April 2017 interview with Fox Business News. “We didn’t just take shop out of high school, we took arts out of vocational education. And that set the stage for presenting an entire category of viable jobs as some type of consolation prize.”

“At the same time, college was getting a big PR push at the cost of trade schools, two-year schools and all these alternative forms of education.

“So we freed up a ton of money to lend to 17-year-olds that have no idea what they want to do with the rest of their lives. And we tell them that the best path for most people is the most expensive path,” Rowe said, chuckling.

Rowe and McGrath emphasize what members of the Technology & Manufacturing Association have known for years. Good careers – a substantial number that will attain six-figure salaries – are available for those that choose to learn trades, without the college payback burden so many are destined to bear.

That doesn’t mean obtaining industry credentials for good manufacturing jobs is easy. One popular way of attaining needed skill standards is through vocational training linked to the National Institute of Manufacturing Skills (NIMS).

NIMS Executive Director Montez King was a high school kid in West Baltimore’s inner city that had little direction until the day a vocational ed teacher collared him. Pulling him through a dark hall into a classroom filled with machines, King heard “an old, wrinkled white guy” say, “We need guys like you in machining,” he said.

King said after the initial shock, he saw exactly what vocational ed instructor Benjamin Webber was saying, and the idea piqued his interest. Instead of pursuing a business administration degree, King chose to enter the school’s work-study program that put him on the road to a respectable career and income. He did well.

By age 18, Montez King bought his first house. He became the plant’s manager. He stayed with the industry until that same Mr. Webber nudged him once again. This time, Mr. Webber urged him to teach vocational ed.

King accepted that challenge, too, and started teaching at a skills school in his old neighborhood. He stayed there, equipping others with skills and knowledge to obtain good jobs, until he was asked to join NIMS.

“Now I get to visit all these schools that had concerns and issues that I had, and I can share my knowledge and experience with others,” King said.

It’s for certain when that high school student was pulled into vocational training, he never anticipated he’d ever be doing what he’s doing now: serving on a White House advisory board and testifying before Congress.

“In today’s economy, jobs are becoming more integrated, cross-disciplined, and technology-driven. We can’t just prepare kids for the jobs we have open today—we have to prepare them for the jobs that don’t yet exist,” King told a subcommittee of the Committee on Science, Space and Technology in February.

“As we build STEM education and training programs, we must focus on three key elements: expanding work-and learn opportunities across the economy, creating education pathways that support students from middle school through career advancement, and engaging industry in the design and deployment of career-related education and training,” he said.

Over the next decade, 3.5 million manufacturing jobs will need to be filled, King told Congress members. The skills gap is expected to result in 2 million of those jobs going unfilled.

“Contrast that economic growth with the fact that our talent pipeline is unsure and 10,000 baby boomers leave the workforce everyday. There are 5.5 million disconnected young people between 16-24 who are currently out of school and not working. That is 1 in 7 young people,” he said. “Only 16 percent of American high school seniors are proficient in mathematics and interested in a STEM career.”

King encouraged the decision makers to take innovative approaches to the future because it not only impacts student success, but local community prosperity and America’s competitiveness – a choice that is sure to be noticed and appreciated by those manufacturers that agreed so strongly with Professor McGrath and Mike Rowe’s views on future jobs.

US Supply Chain Woes to Stretch into 2022, Biden Admin Warns