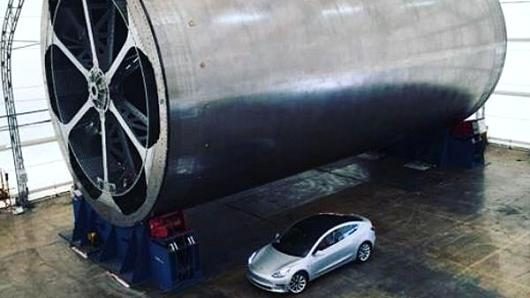 Despite often referencing his aim to reach Mars within a few years, SpaceX founder Elon Musk has shown little hardware for the massive rocket to send humans to the red planet.

Musk shared a photo of the “main body tool” – essentially a large manufacturing mold to weave the carbon fiber that will comprise the upper stage of the rocket. The photo shows the body tool in nondescript tent with a Tesla Model 3 in the foreground. The tent is believed to be on an 18-acre plot at the Port of Los Angeles, which was recently connected with SpaceX as a “start-of-the-art” factory to produce the behemoth rocket.

Big Falcon Rocket, or BFR, is the flagship for the SpaceX vision of creating a permanent, self-sustaining human presence on Mars – and yes, the name connotes more than just “Falcon” to those inside SpaceX. The company released detailed plans in September about the BFR program to send cargo to Mars by 2022 and people by 2024.