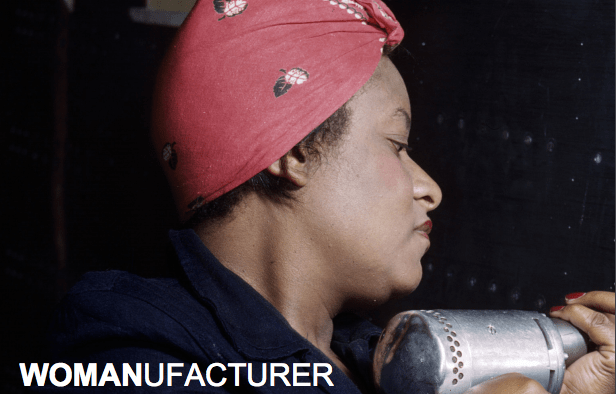 March is Women’s History month, so in honor of the growing number of women in manufacturing, TMA reviews their September 2015 News Bulletin cover story about “woman-ufacturers”:

If it weren’t for women leaving their homes and entering manufacturing plants in the 1940s, the world we know today would be very different.

Not only did the world’s political scenario change dramatically when America entered World War II, so did the nation’s domestic environment – never again to return to pre-war settings. 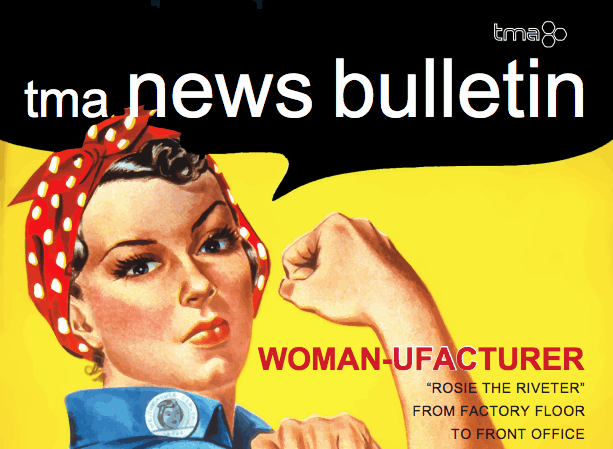 In order to woo women into the workforce while men were fighting around the world, advertising campaigns appealed to women’s patriotism and loyalty to their husbands and brothers fighting overseas. Publicity campaigns dominated magazines, newspapers, movies and radio airwaves.

That’s when Westinghouse launched their “Rosie the Riveter” campaign, featuring an illustration by J. Howard Miller. “Rosie,” a fictional munitions worker, represented the crucial role of women making airplanes, where more than 310,000 women worked in 1943 – 65 percent of the industry’s total workforce.

“We can do it!” Miller’s “Rosie” reminded weary American women that worked eight to ten hours a day, and cared for their children and cleaned houses at night. During the years between 1941 and 1944, the Bureau of Labor Statistics says the number of women working outside their homes rose from 14.6 million to 19.4 million.

In Rosie The Riveter Revisited, by Sherna B. Gluck, women said their wartime work experiences changed the way they felt about themselves.

“Being able ‘to hold their own with men,’ gave a new sense of self, of competency, not only to women new to the world of work outside the home; but, also, to those who had worked at traditional women’s jobs,” Gluck’s interviews showed.

Many women said they were proud to have performed jobs viewed by the public as “necessary and valuable.” In other words, they were proud of their contribution to the cause.

Historians contend that without the American women labor force, the U.S. economy would never have been able to produce the military hardware needed to win the war.

When World War II ended, American men returned to the states, eager to get back to work and the comforts of home they longed for while fighting overseas. America’s Baby Boom erupted as women, for the most part, returned to domestic chores and childcare.

But as that wave of babies and toddlers grew to elementary school age, American women began re-evaluating their contributions to society, and the rate of women returning to the workforce grew once again. From 34 percent in 1950 to 60 percent in 2000, the number of working women grew from 18 million to 66 million women in fifty years.

While the Korean and Vietnam conflicts drained men from the workforce, the overall economic effect was nothing compared to World War II. No longer needing women to fill manufacturing jobs, women instead headed for medical, educational, retail and social job sectors in the 1950s, 60s and 70s.

Throughout those decades, the Great Lakes Region became the heart and soul of American manufacturing. Large electronics companies such as Motorola, automotive companies like Ford, GM and Chrysler as well as Caterpillar, United Steel and other manufacturers thrived in America’s Steel Belt. Associations such as the Tool and Die Institute (now TMA) thrived.

Women in the Chicago area like TMA member Helen Karbin of Lexco Cable worked alongside their husbands when they returned from fighting in Korea. Helen’s husband Harold and his brothers were energized with ideas for using cable and soon the bicycle shop they started expanded into manufacturing cable locks for bicycles, and on from there.

At age 86, Helen still does much of Lexco Cable’s billing. She and her husband, son and now, grandson work together – with plans to expand the business further in the days ahead.

Annette Lovelace helped her husband Jim start TMA member Quality Fabrications in 1973 by delivering parts orders out of the family’s car trunk. She has been her husband’s most trusted advisor and confidante during the company’s growth to nearly 100 employees. Today, three of her four sons oversee the plant’s growth and customer commitments.

Other Chicago area women are today heading up manufacturing companies that their fathers or grandfathers established. Others are grabbing the reins of newly-purchased companies.

And then there are those women – although their numbers remain a fraction of their male counterparts – on shop floors that are working as assemblers, quality control managers, molding, die and CNC machine operators. Every year, TMA’s training programs include women eager to learn machine skills.

With women representing nearly half of the total U.S. labor pool, and just over a quarter of the manufacturing workforce, there is plenty of opportunity for women to reenter manufacturing.

But a recent study by The Manufacturing Institute, APICS and Deloitte says that Americans appear to be reluctant to choose careers in manufacturing, and too few are encouraging their children to go into the field.

However, those familiar with manufacturing ranked it third-most-popular out of seven industry choices. And 64 percent of those that have worked in manufacturing agree or strongly agree that manufacturing jobs are interesting and rewarding.

One executive said, “The focus must start early, garnering interest in grade school and maintaining the interest of high school students.” Another said, “We have to put pride in manufacturing jobs.”

And the mention of pride, if one weighs the 20th and 21st centuries’ evolution of women in American manufacturing, brings the discussion full circle.

Why, again, did women leave their homes and families to work at munition and steel plants in the 1940s?

Pride – pride in their country, pride in their husbands fighting for freedom overseas, and pride in their newfound abilities to “get things done.” It was socially acceptable, esteemed and promoted by the culture around them.

21st Century women want respect for the work they do, flexibility in their schedules, fair wages and opportunities to excel and advance – the very same things “Rosie the Riveters” wanted 70 years ago.

Indeed, with a little advertising, encouragement and flexibility, women and manufacturing could come full circle.