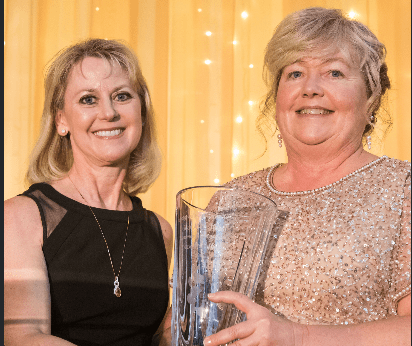 In presenting the award Saturday night at TMA’s 92nd Annual Dinner, WMA immediate past Chairman Stacia Hobson pointed to how important stirring the next generation’s interest in manufacturing is to Ms. Shelow. During the past 15 years, Ms. Shelow founded and grew the idea of manufacturing camps for kids. Since 2003, she’s raised $165,000 to implement 65 such camps across the United States.

In addition to the shop and staff lunchroom, the new facility has open offices and a community room for regional meetings. There, local youth meet weekly for their robotics club – something with which Teresa and Thom have been active for years.

Teresa has been president of the Northern Illinois Chapter of Association of Women in the Metal Industries, and co-founder of Women of Today’s Manufacturing, as well as chairman of TMA’s Manufacturing Women’s events in 2015.

“Thank you for the encouragement I’ve received tonight,” Teresa told the dinner crowd. “I believe in workforce development and encouraging young people to consider manufacturing for their careers. All through the time we’ve worked to encourage young people, and when I look at the future, I believe there’s a gap in the workforce of women in the 20s and 30s. I believe manufacturing needs those women.”

“With the technology, computers, quality we need to encourage women to come into manufacturing,” she said. “That’s going to be my next focus.”

Besides being designated as the 2018 Rose Mottl Award winner, Ms. Shelow was also inducted last week into a 3-year term on TMA’s Board of Directors.

The TMA Rose Mottl Award was established and named after a pioneer woman in the Chicago area manufacturing – Rose Mottl – who in the early part of the 20th century led an exemplary career as she carried on the work of Atlas Tool Works after her husband’s untimely death. Atlas Tool Works continues today and is now led by the founder’s fourth generation.