NB Cover Story: The Impact Legalized Marijuana Could Have On Your Business 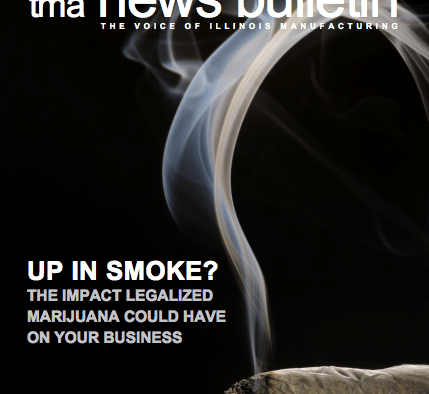 Suppose a company has federal contracts to make precision parts requiring consistent accuracy. The slightest mistake or failure in quality could mean a lost contract, fines, or worse. Now suppose one of the company’s employees, who is involved in the manufacturing of those parts, is impared by marijuana in his or her system. How does a manufacturer handle a situation like that?

Some argue that it’s no big deal; that’s what quality control is for. Others warn that it is a serious, and growing, threat that impacts the safety of the employee, their colleagues, and the company.

Either way, the push to legalize marijuana is making its way to center stage in the Illinois General Assembly. Should the Land of Lincoln become the first state in the Midwest to legalize recreational use of marijuana? If it does, how will that impact workplace employment, safety, and productivity?

Maintaining and growing a reliable, qualified workforce is at the top of every manufacturer’s list. While it is hard enough to engage the “next generation” in pursuing careers in manufacturing, drug use is another obstacle to overcome.

A recent study published in The New York Times showed that up to half of good-paying factory job applicants in the upper Midwest fail required drug tests. Drug use and abuse is draining the talent pool – not only from increasing use of marijuana, but also abuse of prescription opioids and alcohol. In states like Illinois with exceptionally high workers’ compensation insurance rates, accidents involving staff under the influence of drugs could financially devastate a company.

“Due to the high accident rates in the manufacturing industry, it is vital for management to take necessary steps to implement programs and procedures that will increase manufacturing safety and worker productivity,” the drug testing service Confirm Biosciences reports.

Allowing a worker to handle heavy or life-endangering equipment or machinery while under the influence of medical marijuana, opioids or even alcohol could result in serious injuries.

“The lightest product we make is 1,500 pounds, and they go up to 250,000 pounds,” one Ohio manufacturer concerned about the use of drugs in his plant said. Workers there pull steel containers from a high temperature forge with sparks flying in all directions.

“If something goes wrong, it won’t hurt our workers. It’ll kill them — and that’s why we can’t take any risks with drugs,” he said.

Even as many states decriminalize recreational marijuana use or allow access by prescriptions, “relaxing drug policies isn’t an option for manufacturers in terms of insurance and liability,” Edmond C. O’Neal of the non-profit Northeast Indiana Works told The New York Times. And loosening drug policy restrictions often translates into more public acceptance of once-illicit drug use, studies show, and with that, the next generation tends to experiment more often.

Legalization and the Illinois General Assembly

The dilemma of what to do with drug-impaired workers is likely to intensify for Illinois manufacturers as the decision whether or not to legalize recreational marijuana is expected to soon come before the Illinois General Assembly.

State Rep. Allen Skillicorn (R-East Dundee) announced that he would be one of the first socially-conservative state lawmakers to urge the recreational legalization of marijuana in Illinois. However, he says, while the change in drug policy would broaden access to marijuana, the policy should not preclude business owners from taking action if an employee’s work is affected.

“Manufacturers would still be able to legally test for drugs and if they have a set policy, they would be able to terminate for medical or recreational usage. There’s nothing wrong with that,” Skillicorn said.

TMA’s Government Relations Committee Chairman Zach Mottl of Atlas Tool tends to agree with Skillicorn’s position, suggesting the determining factor about a shop’s stated policy should be whether the presence of marijuana in an employee’s system is resulting in any quality defect.

“Manufacturers, like any employer, do not have much control over what employees do on their own time and what health conditions they have,” Mottl told TMA News Bulletin. “This includes alcohol, marijuana, prescription drugs (both prescribed or illicit), diabetes, heart conditions, arthritis, cancer and chemotherapy, lack of sleep, stress at home, etc.

“There are so many factors that might affect how an employee performs a function like this. That is why the employer, who is responsible for the mission critical part, must always be vigilant in testing and verification of parts before shipment,” Mottl, who is Chief Alignment Officer at Atlas Tool & Die Works, said.

“I do not think marijuana in someone’s system is a disqualifier, just like any of these other factors are not disqualifiers by themselves. However, if the employee appears to be intoxicated or is otherwise unsuitable for work, that needs to be dealt with immediately, regardless of the reason,” he said.

If an employee is not exhibiting signs of intoxication and their work quality and safety procedures are all there, then the presence of drugs in the system doesn’t really matter, Mottl said. A contractor is ultimately responsible to verify the quality of the work and suitably test the parts just in case any factor, not just the possibility of pot usage, starts impacting quality, he said.

Human resource advisors say companies must include an updated section in their employee handbooks about alcohol and drug use – explaining clearly what the companies will and will not allow.

Since Illinois is facing financial shortages and legalized marijuana promises a new substantial revenue stream, manufacturers need to prepare for the possibility that Illinois may become the 10th state to legalize recreational marijuana. Cook County is already asking voters their views on the topic in an upcoming ballot measure.

“In light of these realities, Illinois employers would be wise to secure more legal protections against workplace intoxication of all types, in exchange for their support of legalized marijuana,” GRC Chairman Mottl said.

He noted that whether high, drunk, or on prescription pills, people should not be working in those conditions. Employers should have strong protections that include allowing employers full discretion when it comes to the burden of proof.

“I think it’s a pragmatic approach that can result in winwin scenario while also moving the industry away from gangs and drug dealers and into a regulated environment where it’s safer, controlled, and where the people selling pot legally aren’t pushing harder drugs either,” Mottl said.

For or against, pro or con, the issue of legalizing recreational marijuana is one that employers cannot shove under a rug. It’s an issue that Illinois manufacturers will face – sooner rather than later.