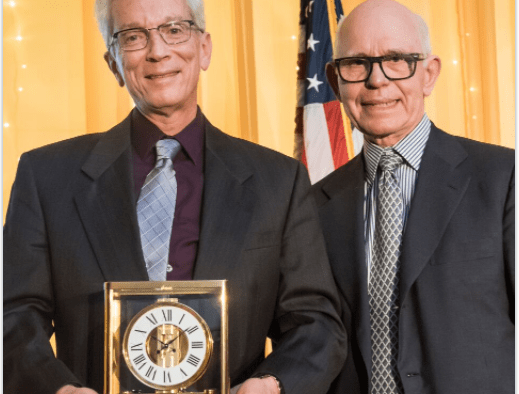 The Ziegenhorn family is “a phenomenal example of what a family can do together,” award presenter John Winzeler told the audience of over 300 TMA members and associates.

Mr. Ziegenhorn chose to pursue a career in manufacturing over a career in dentistry, partially because he admired so much his father’s commitment to machining and desire to one day start his own company.

In 1978, Paul Ziegenhorn and his brother Jim helped to make their father’s dream come true by starting Matrix Plastic Products. The family launched the enterprise in a small rental space, and the business grew as Matrix Plastic began making more and more products for the medical field. He and his brother enlisted other Ziegenhorn family members into the business that now is located in a 30,000 square foot facility.

“I’ve always said one way to solve workforce problems is to have a big family,” John Winzeler said. “And that’s what the Ziegenhorns did.”

“There’s a uniqueness to how he’s grown the business,” Winzeler continued. “Paul said he found people with diverse interests and diverse educations. He then aligned their passions together with something they do at Matrix. The company is committed to the future and committed to advancements in medicine.”

Ziegenhorn has been consistently active in TMA, having served on the TMA board of directors for a number of years, while serving as chairman in 2011.

The Winzeler Award has its roots in the establishment of TMA. On August 27, 1925 eight company owners gathered to form the Tool, Die, Special Machinery, and Manufacturing Association. Max Heinze was elected as group’s the first president. Johnny Winzeler joined the association two years later with his company Reliance Die and Stamping. Max and Johnny were association pioneers. The award presenter’s father, Harold, and Max’s grandson approached TMA in 1971 to establish honors recognizing industry and association leaders.