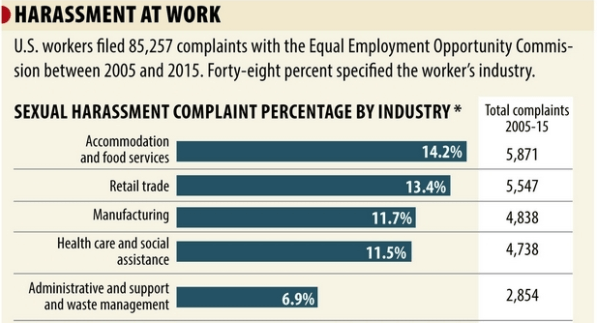 CHICAGO – Manufacturing is an industry segment that’s especially difficult for workers and where harassment occurs, according to a report in Crain’s Chicago Business.

The report focused on EEOC numbers from 2005 to 2015, which said manufacturing had the third highest number of complaints filed – after accomodation and food services and retail trade.

Ford paid $10.1 million in August to settle allegations that female and black workers were harassed at plants on Torrence Avenue on the Far South Side and in Chicago Heights. Still, former Ford employee LaWanda King lost her job in 2013 and then lost her lawsuit in the 7th Circuit in October.

After King called the company’s harassment hotline to complain about a supervisor, she was transferred to a new department and stopped receiving overtime. The company eventually terminated her for absenteeism, according to her 2013 lawsuit.

King’s court filings included an affidavit from Grant Morton, the former United Auto Workers chairman at the Chicago plant, who said that a Ford manager warned that “your people better stop complaining” about sexual harassment. When Morton told a different manager that King feared she was being marked absent in error, the manager responded “that it would be helpful if Ms. King dropped her EEOC charge.”

The rest of the Chicago Crain’s story is HERE.

The topic will also be discussed in the upcoming January 2018 TMA News Bulletin.