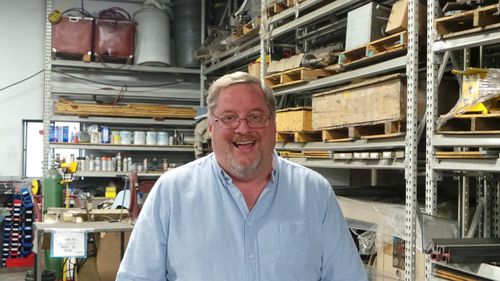 In 2007, Spare Part Solutions branched into roll handling equipment and launched a fabricating division. Then last year, they moved into a 13.5 thousand square foot facility to include an extensive inventory of printing machine parts.

Sosnowski devotes a substantial section of Spare Part’s facility to house inventory because he says he’s established ongoing relationships with his customers, and can anticipate what they will need.

While things are going well for his business these days, Sosnowski says getting where he is hasn’t been easy. He’s learned a lot about working machines and running businesses over the years – the hard way.

Sosnowski first started working at a machine shop right out of high school, where, like many others, he learned about machinery on the job.

“I did everything from setups to programming, from the mills to the lathes, and began doing the tougher stuff,” he said. “I was making decent money at a place that had about 20 people and doing almost everything. The owners said at one time they might want to sell it to me, but nothing came of it.”

Then an ISL Certification trainer suggested to Sosnowski that the two of them start a business together. The venture lasted less than four years.

“We started a business that didn’t work out very well. We ended up closing the business in 2000,” he said. “What it took was a lot of capital and debt. We had 24 guys working for us when one of our major customers went south.”

Things were tough and future looked dim for Sosnowski, when out of the blue, a man looking for a specific machine part noticed a jacket Doug was wearing with his closed company’s logo on the back.

“Do you own a machine shop?” he asked Sosnowski. The conversation led to work and the eventual purchase of a Bridgeport machine to fill the man’s order.

“I worked with him for a year. After that he asked me if I was interested in buying his business that made parts for printers,” and, Sosnowski said, before long, he was back in business making parts again.

But the economy hit rough times, a considerable amount of work went overseas for a while, causing another business setback. It wasn’t until 2003 that Spare Part Solutions came into being.  Before that, it was tough to keep at the work, Sosnowski said.

“I didn’t give up, but it was difficult,” he said. “You feel like a failure, like you got sideswiped.”

But some of the most successful people in the world hit rough patches at one time or another, and despite multiple efforts, things finally worked out.

“My older brother said, ‘Doug, you just keep getting up and trying again,’” and those words encouraged Sosnowski, he said. “Quitting just wasn’t an option.”

Sosnowski says these days few experienced successful business owners are around to help mentor those just starting their businesses, and that’s a shame.

“I’ve been in business 12 years. It took me 11 years to put together a good banking, legal and accounting team,” he said.  “Counsel from someone who has been through it before would have been valuable and welcomed.”

Doug credits that team he’s pulled together along with his team members at Spare Part Solutions with his success.

“I’ve got quality people around me that make up our team – including my assistant and Spare Part’s engineer,” he said. He also points to those on the shop floor that keep things running smoothly and keep orders shipping out on time.

“It’s hard to find good people, and the people that we’ve brought in with medium to low skills, we’ve developed and trained,” Sosnowski said.

Some were refugees, and some were down and out, he said. “We’ve worked with them to learn the needed skills.”

Spare Part Solutions has begun reaching out beyond making printing parts to other technology fields, such as aerospace, and are in the process of expanding outreach beyond.

Sosnowski’s approach to getting and keeping customers is different, he says.

Sosnowski says back in the old days, businesses like his were about relationships with companies and vendors. And while times have changed, those customer relationships still matter.

“We know what our customers are buying and we’re ready for them,” he said.

Spare Part Solutions is located at 7480 Forest Hills Road in Loves Park, IL 61111 or on the web at www.sparepartsolutions.com