TMA Profile: How To Wake Up A Sleepy Company – Phil Surma Of Wrap-On 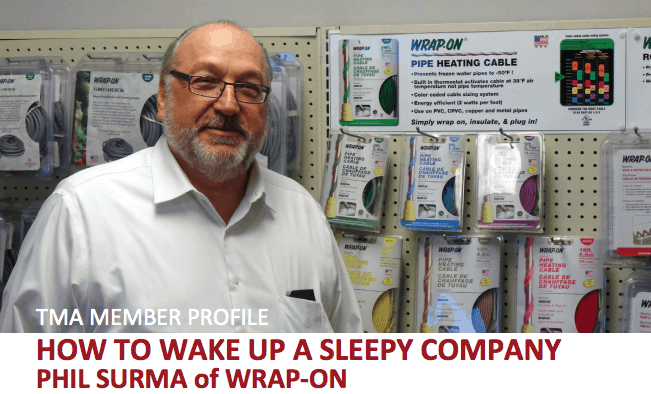 When Phil Surma was asked to join the Wrap-On company as its new General Manager three years ago, he took on the job with the vision of waking up a 70-year-old company.

“Wrap-On was a sleepy little company that had not brought out a new product since 1988,” Surma told News Bulletin. “The challenge for me was how to get everyone in this building up to speed. We’re almost there. We’ve got a fabulous crew here, one that wants to work.”

The company started in the late 1930s offering one product: heating wires for chicken coops. Then called the Poultry Equipment Engineers Inc., founder Thomas C. Russell set up a factory on Chicago’s Superior Street for the purpose of keeping chickens warm.

Over the next 20 years in Chicago’s world-renowned frigid winters, Russell’s chicken coop warming idea expanded to include electric heating cables for water pipes, roofs and gutters, and a variety of other winterization products. In 1972, Russell’s company’s name and product changed to be “Wrap-On.”

Since Surma has been at the helm, he’s led an expansion and update of Wrap-On products, many of which are found in major home improvement centers and on Amazon.com.

There’s no way Wrap-On’s founder Mr. Russell – as creative and ingenious as he was – could have imagined the products his company would one day offer in the 21st century.

All of Wrap-On’s products are made in America – something that’s become a selling point for the company. For three years the company had much of their products made in China. But the logistics and product quality suffered and ten years ago, they brought all production back to Illinois.

“We turned that into a marketing advantage,” Surma said. “Our competitors require a six-week lead time. With the technology we now have, we can turn orders around in 48 hours.”

A networking connection while working at a California firm put Surma in touch with the owners of Wrap-On. Surma says he was challenged by what he thought the company could become.

“We added ten new products in the first year I started,” Surma said. Another new product line is likely to be home integration, connecting electrical appliances via wi-fi for inhome convenience.

“We’re selling products, ideas and a work ethic,” he said.

It became a necessity to upgrade the company’s ordering system when they won a major home improvement franchise’s business.

“We burnt out the old fax machine taking ordering in one day,” Surma said. “We had to update and expand – and now the system is much easier and efficient.”

As soon as the once-sleepy company updated their product lines, and the packaging and ordering systems, Surma hit the road to re-establish ties with customers that hadn’t had a person-to-person visit from Wrap-On in years.

“I went on the road and met all our customers, and let them know we had a new sheriff in town,” Surma said. “It’s all about the culture. We have a ‘can do’ attitude, we work hard and are never happy with status quo.”

It’s that mindset that Surma says makes him the optimist he is and causes him to thrive when faced with challenges like the one at Wrap-On.

“The way I see it, there’s always going to be tough issues in growing a business,” he said. “But those problems are just speed bumps. If every time you come up to a speed bump you stopped to think about it, you’d never get anywhere. Sometimes the best way to get over a speed bump is to hit the gas and just keep going.”

“Keep your eyes on the horizon. Don’t look at your feet,” he said. “That’s the way to keep building a company and be optimistic about the future.”

In case you’re wondering, no, Phil Surma hasn’t been featured on a TED Talk yet, but maybe he should be. There may be a few more sleepy companies out there his outlook could help to wake up.

When he can, Phil Surma joins the South Suburban TMA Monthly breakfasts. You can meet him there, or learn more about Wrap-On at www.wrap-on.com. The plant is located at 11756 S. Austin Avenue in Alsip, Illinois.