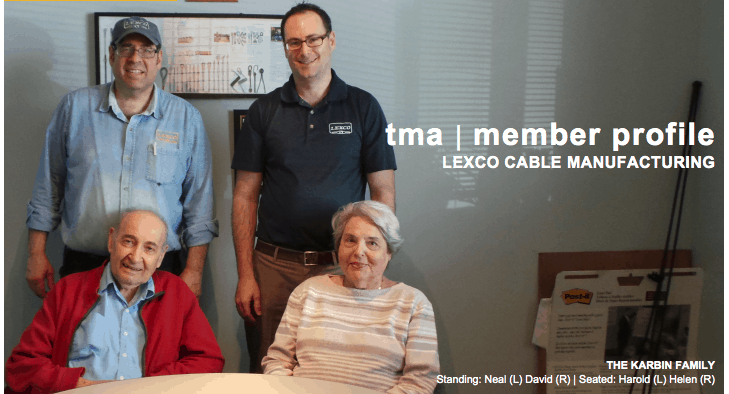 Even at age 86, it’s not unusual for both Harold and Helen Karbin to be working at the business they started 63 years ago. Harold works on Lexco Cable’s accounting and signs checks, while his wife Helen types up sales orders.

The Karbins say they are delighted that when they come into work, they see their 57-year-old son Neal and 32-year-old grandson David.

“Seeing your progeny involved in the family business is nice,” Helen said.

The Karbins started Lexco Cable Company on Chicago’s west side soon after Harold came home from fighting in the Korean War.

“In 1952, my brother Ray and I started a hardware and bicycle shop at the Lexington Theatre in Chicago,” the eldest Karbin said. His three other brothers worked out of the same venue building truck seats.

It wasn’t long before one of Lexco’s bike customers asked if the Karbin Brothers could make a bike lock out of cable.

“Someone asked me to make a bicycle lock out of 3/16 cable, and so they made one, Harold Karbin said. “After that, we made some gadgets for the coiling cable. We were on our way to building the business we have today.”

Today 60 employees work at Lexco Cable, meeting the customers’ demands for cable products. The oldest of Harold and Helen three children – Neal – is leading Lexco Cable into a new era of challenges.

“Cable is going to continue to be a widely-used product in the days ahead,“ Neal Karbin said. “It has attributes you don’t get with solid steel – for use with fabrications, it has multiple uses for a diverse audience. I don’t think we’ve even touched the possibilities and don’t realize yet everything for which a cable can be used and to what it can be attached.”

The second generation Karbin started working with his parents at the bicycle shop when he was in grade school. After studying auto mechanics at Southern Illinois University, he returned to the Chicago area to attend Wright Junior College. Karbin says by then, he was already selling Lexco products and coming up with new ways to reach out to customers.

During the time between when Harold and his brother Ray founded Lexco, when Neal joined and when David came on, the business atmosphere has changed dramatically, Neal said.

“When we started the business, there were almost no regulations   on companies like ours,” Neal said. “We deal with all kinds of regulations now, especially with military specifications that affect our products.”

“The challenge is to keep the company moving forward, and not get sidetracked,” Neal said.

When to automate and when not to automate is another challenge Neal and David face as technology makes more computerized and versatile machinery available.

“A business can spend a lot on machinery, and if jobs don’t come in to keep that machine running, it can be a waste of resources,” Neal said. “But it you don’t spend that money on automation, you can take too long for a job. Sometimes machines are delicate and go down. Then you need people familiar with the job to step in.”

David, the youngest Karbin, said he agrees the debate over automation is a big one between the generations.

“Production is what’s important. I would say that there is a time and a place for automation. It doesn’t fit every job,” he said. “The challenge is to find when it’s appropriate, and keep at it.”

David says after college and several internships, he returned to Lexco Cable after the company moved to Norridge in 2003. The environment of the new facility with its offices, nicer warehousing, and updated production line was “transformational” and David was lured back into working at Lexco with his father and grandparents.

“My number one job is the sales department – I’ve taken the lion’s share of that work from my dad, freeing him up to handle other responsibilities,” he said.

And a diverse clientele protected Lexco Cable from the steep downtime others experienced in 2008 and 2009.

“A huge key is diversity. We did not feel it as much as others,” he said. “I guess I can only speak from where I’m sitting. I like to think of Lexco as a young company. We’re still in the process of getting our name out there and getting the market share.

“I like to think that the sky’s the limit, and we’re making strides forward to be a better partner for new customers,” David said.

It’s too early to tell if there will be a fourth Karbin generation to carry on the business, but with four grandchildren and two great-grandchildren, the older Karbins say they are delighted they started their own business 63 years ago, and that their family is on board.

“We just love that we’re working together as a family,” Helen said. “It couldn’t have worked out better.”

Lexco Cable is located at 7320 West Agatite Avenue in Norridge, IL or on the web at www.lexcocable.com