After College, A Tool & Die Shop Is Where Newko Tool’s Scott Riddell Landed 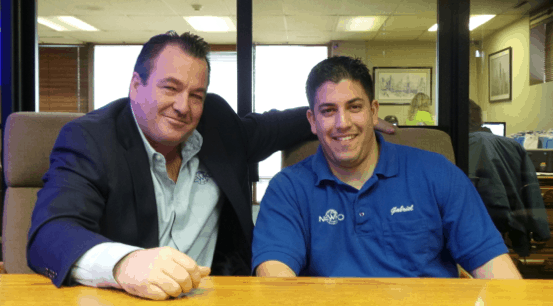 PALATINE – Newko CEO President Scott Riddell’s story of leading a manufacturing company for thirty years is one filled with determination, inspiration and flavored with some reservation.

Scott’s stepfather Harold Newberg and his partner Gene Koch took a segment of each others’ last names in 1958 to name their new company  “Newko Tool.” The two partners eventually expanded their work from die casting to tool making and metal pressing for big northern suburban companies like Motorola and Northup.

By the time Scott was old enough to help at Newko Tool, Chicago area manufacturers were in the midst of company-making and –breaking decisions as they watched their work move to China and Mexico.

He had completed a degree at Winona College in business administration, and agreed to return to help the family business through a rough patch during the late 1980s manufacturing downturn.

“Thirty years later, and I’m still here,” Riddell, 51, said. “I came back from college, put an apron on and started tool and die work in the shop.”

Although Scott Riddell emphasizes it took everyone working at Newko Tool to make it through those dark days, it was ultimately his vision to take on prototype work that turned the company’s shaky future around.

“My stepdad resisted the idea, and believed that American companies sending their work overseas was just a fad that would last a few years,” Riddell said.

But after research and evaluating the company’s strengths, in 1996, Riddell launched Newko Prototype, focusing on precision prototypes and short runs.

After years of struggling, Newko’s new direction took off, allowing Riddell to buy property and a building in Palatine. One of the proudest days for Riddell was the day he invited his then-80 year old stepdad to the new location and sit in a new plush chair and desk set for him.

“It was worth all we’d been through to see him there,” Riddell said. “It was a proud day for me.”

Today, Riddell’s team at Newko is his pride and joy. He enjoys telling stories of how various employees joined his team over the years, and how important they are to the company’s success.

One of the young men Riddell has taken under his wing is in charge of Newko’s Human Resources, 27-year-old Gabriel Casanas.  Casanas says that while he had no background in manufacturing when he joined the company two years ago, he likes the challenges at Newko Tool.

“I want to stay in manufacturing. Sure, as with any job, there are likes and dislikes,” Casanas said, “But I like working here. I like the fast pace and the opportunity to advance.”

Riddell says character is what he looks for when he’s in the market for new staff, vendors or clients. He says that while manufacturers often compete against each other for work, they understand the ups and down of their industry, which leads to a camaraderie and mutual respect.

“When I was first working at Newko, several older, more experienced business owners would take me out to lunch, and give me pieces of advice,” Riddell said. “They knew what I was going through, and it really helped. After a while with those mentors, bonds and relationships, I found myself in a culture that was unique.”

Some of those relationships led to lifelong friendships and a valuable referral network.

“At trade shows direct competitors come up to our booth to check out what we’re showing, and at the end of the show, we all go to dinner together,” Riddell said.

“The way most in this industry think is like, ‘Hey, I lost that business to you because you must have earned it. ‘ They’re not all like that, but the vast majority are.”

Newko’s 40 employees work in a brightly-lit, clean shop, where the President greets them daily at their machines.

“I painted these walls white myself when we moved in here, because I wanted our shop to be a place where the team is proud to work and where they know they are respected,” Riddell said.

Riddell says the nation’s mounting debt and skyrocketing taxes concern him about the future.

“We just keep kicking the can down the road. Sooner or later we’re going to catch up to it. I worry about what that’s going to do to all manufacturers when it happens.”

But it’s not all doom and gloom for Riddell, who says his team at Newko keeps him optimistic.   “Why do I do what I do?  I like it. I love this work,” Riddell said. “And a whole bunch of families here depend on me to lead,” he said.  “This is my team, and that’s my role.

Newko Tool is located at 720 South Vermont Street in Palatine, Illinois or on the web at www.newkogroup.com.

Previous Article
Looking For A Good-Paying Job? Millions In Manufacturing Are Waiting
Next Article
Thinking Of Moving Your Plant? Mike Magliano Shares Words Of Wisdom