Busting Myths And Breaking Through: Colin Cosgrove Of Laystrom Manufacturing 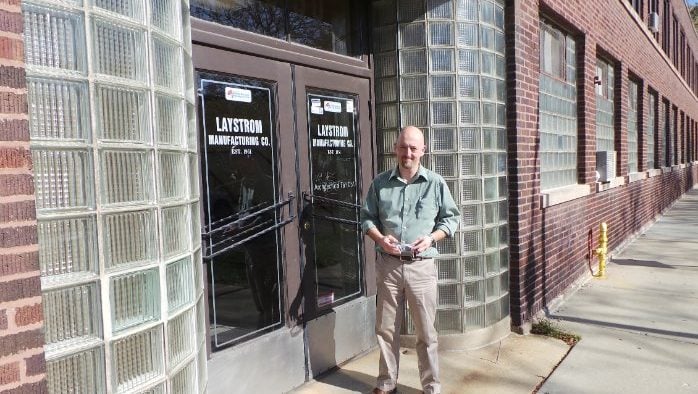 The first thing Laystrom Manufacturing Company’s new president sees when he comes into his office every morning is a whiteboard on the wall. On that whiteboard are two arrows – one green, pointing up, and one red, pointing down.

“That about sums up my job at Laystrom Manufacturing,” the 41-year-old said when TMA visited his office.

Bob Laystrom, one of the founder’s grandsons, brought Cosgrove into the company as a sales manager. After six years at Laystrom, Cosgrove moved to Acme Industries for two and a half years. He was then asked to return to Laystrom, where this month he became president of the company.

“I learned a lot at Acme and the other companies,” Cosgrove said. “I appreciate every person along the way that invested time helping me become better at my work. That includes men like Virgil Delay, Guy Cassidy, Fred Young and, more than anyone, Bob Laystrom.”

Unlike many others, Cosgrove started in manufacturing with no special training. He got his first job in America in 1994 at age 20, when he migrated to the U.S. from the west coast of Ireland.

“A cousin of mine knew the vice president of a manufacturing company, and he gave me the job at the floor level,” Cosgrove said.

“I don’t see that I offered anything exceptional,” he said just before becoming Laystrom’s first non-family president. “I hope that encourages others just getting started.”

Cosgrove works with Laystrom Manufacturing’s 60 employees, who come from diverse backgrounds. Since October last year, they have been meeting altogether in a huddle every morning to discuss the day’s work ahead.

“We got the idea from Craig Zoberis at Fusion OEM,” Cosgrove said. “And the team is seeing more how we all work together to meet our goals.”

The new interaction among Laystrom workers has been positive. While it’s important to train the next generation of machine operators and toolmakers the skills they need to do their jobs well, Cosgrove says it’s also important to provide skills on how to think as a part of a team.

“For instance, an operator could do his job and just pass on the product’s problems to the next person,” Cosgrove said. “But if he has the ability to think and understand that he has an opportunity for input, perhaps he could figure out how to correct the issue, make suggestions to correct it, and not just pass it off.”

“We want our team to think of their responsibilities to fellow employees, to our customers and shareholders. That will happen,” Cosgrove said while pointing to the whiteboard in his office, “If they’re doing their work with these core values of safety, respect, collaboration, and continuous improvement in mind every day.”

Keeping those important qualities in mind, over days, weeks, months and years, will cause them to become part of a strong workforce at Laystrom – not just doing a job, but living within a career.

Cosgrove says that a substantial part of his leadership philosophy comes from people he’s met through TMA’s network. While some manufacturers hesitate to network with others because they may compete for the same business, Cosgrove says he’s found that there is a great deal to be learned from people with common experiences, and that sustained business and customer satisfaction today is based on a company’s ability to deliver what they promise with top quality execution – not only in specific service and product specialties.

“A lot of people push to find their marketing niche, their singular areas of expertise,” he said, “but if a company isn’t doing fundamental blocking and tackling – you’re not going to succeed.”

Laystrom Manufacturing deals with the challenges of being located in a Chicago residential neighborhood, where property taxes are high and new regulations place more pressure on the company’s bottom line. From time to time, there has been discussion about moving out of Chicago because all those negatives put companies like Laystrom at a disadvantage.

“From pure business and cost perspective, if you have someone just 50 miles away over in Indiana that has a completely different cost structure and is able to offer the same work for lower prices, the customer in Kentucky doesn’t care if we’re near great restaurants – they’re focused on the bottom line,” Cosgrove said. “That’s why we have to excel every day at our jobs and deliver a different level of value to that customer.”

Despite the challenges, most important to Cosgrove is that his daughters – ages 3 and 1 – grow up to see through his life experience that hard work allowed the opportunity for him to climb from a shop floor to the executive level.

“That’s endemic to America,” he said. “It really is the land of opportunity.”

Laystrom Manufacturing is located at 3900 West Palmer in Chicago, among a middle class row of bungalows and it can be found on the Internet at www.laystrom.com

Used by permission. By Fran Eaton.