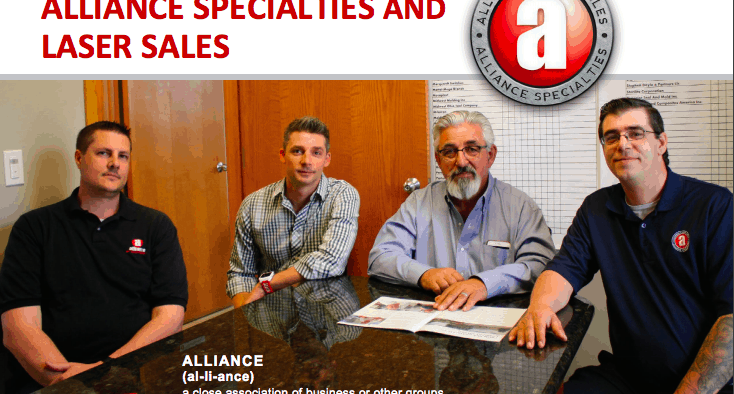 “We know molds, that’s all we know,” John Demakis, coowner and president of Alliance Specialties and Laser Sales says.

And knowing molds is crucial for the network of Chicago area manufacturers Alliance Specialties serves. The company located in Wauconda Illinois does mold maintenance and polishing, laser welding and engraving, as well as hot runner manifold cleaning. They also sell laser welders and engravers.

“There’s a whole world out there that needs laser welding, that needs polishing, that needs something that we offer at Alliance. We are working to market ourselves better to tell people what we do. There are opportunities out there – we just have to find them … or they have to find us,” Demakis told TMA’s News Bulletin.

Alliance’s behind-the-scenes work is the type that exists and thrives due to relationships with other manufacturers. Advertising what they do every day to the public would be meaningless, they say, because their mold repair work focuses on keeping manufacturers active and productive.

Surrounded by sons Tony and Christopher and co-owner Doug, John Demakis reminisced about the days when he and his then-partner Vince Sabella launched the company in the late 1970s.

The two started Alliance in a one-car garage in Elmwood Park, moved to a two-car garage, and eventually to the 30,000 square foot building they now occupy in far north suburban Wauconda. The first service Demakis and Sabella offered was polishing.

As their customers conveyed to them other needs, Alliance added services. Meeting customer needs has opened the door time and time again to more work, more opportunities and growth for Alliance.

“Most of our customer base can use all the services we offer, and because we house so many different services, turnaround is faster,” Niggemann said.

Their recent acquisition of a hot runner opened up a new base of customers. Niggemann left his father’s mold making business to laser weld at Alliance after Demakis read about laser welding and invested in the new technology.

“When we started laser welding with Doug, a lot of people doubted whether it would work,” Demakis said. “We were one of the first in the Midwest that started with laser welding. Now it’s accepted standard.”

Demakis’ third son Christopher, who began in nickel plating, started working at Alliance after high school. He and his uncle now oversee the company’s polishing services.

“I grew up wanting to work in the shop,” Christopher said. He attended machine school, and learned polishing while working at the company. “I liked it,” he said, “but I really like just being in the company.”

Older son Tony had his first taste of the industry at the age of 10 when he was cutting the grass and sweeping the floors. After running a marketing and graphic design company for the past 13 years, he returned to Alliance.

“There’s a need here to do more: for our customers, for our employees, and for the industry. The goal now is for greater exposure, so we’re getting more involved in the manufacturing community in order  to grow the brand,” he said.

Plastics molds for dispenser caps, medical devices and automotive parts are more in demand than ever. The heavy use of plastics molds demands the type of repair work Alliance does. Including its California branch, Alliance now employs 40 plus.

Like other manufacturers, the Demakises and Niggemann are looking for a new generation of workers to learn from the hard-to-replace longtime skilled specialists now in the Alliance team.

“Most of our work calls for specialized, hands-on skills,” Niggemann said. “We can’t send someone to a class to learn much of what we do. Much of our work is through microscopes in order to get it done right. So for the most part, we train internally.”

And while they’re dealing head on with challenges of finding new people while getting the word out about what they do, Alliance is sticking to the company’s basics: quality work, good service, and a valuable network.

“We’ve worked on relationships all our lives. Relationships are fine, but we also have to do a really good job. We’ve surrounded ourselves with really good people that do really great jobs that make us look good. I’m proud of the fact that we’ve built a great group of people here,” the elder Demakis said.

And, he emphasized, a great group of people that really know molds.

Find more about Alliance Specialties and Laser Sales at: www.alliancelasersales.com.

By Fran Eaton, used by permission from the August 2017 TMA News Bulletin

Previous Article
Another TMA Graduate – This One “Unstoppable”
Next Article
Are You Ready? Renewed Manufacturing Optimism Means More Workforce Training