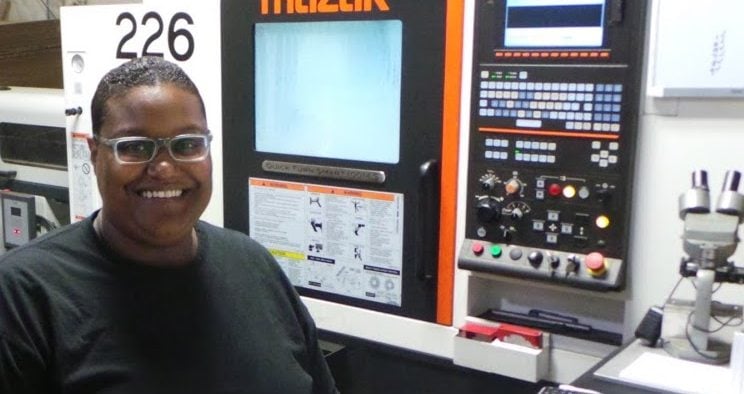 CHICAGO – Markeia Wilkins, 32, drove trucks and buses and worked as an auditor and pharmacy tech before pursuing a career in manufacturing.

She’s excelled in TMA training and has already earned three NIMS credentials. She is now in TMA’s apprentice training program.

“I get bored quickly. I need to be challenged,” Markeia told News Bulletin. “I’ve always been pretty good with my hands, and good in math and problem solving, so this is a good fit for me.”

When she first heard about Bethel New Life’s training program with TMA, she was a bit hesitant to get involved, she said.

“I didn’t want to be in a program advertised for lower income communities. There’s a stigma with that. I didn’t want anyone to think I was a poor black girl that couldn’t find her way,” she said. Instead, Markeia wanted to earn her way through TMA classes and took great pride in doing it on her own.

“I went to the training because I was interested in manufacturing, interested in learning how to work on a quarter of a million dollar machine and not destroy it,” she said. “That, and I wanted to learn how to figure out the tooling and the programming the job involves.”

Markeia started working at Atlas Tool Works seven months ago. During the summer, she would leave Atlas in the afternoons and go to TMA’s training facility at the Schaumburg headquarters two nights a week for apprenticeship training.

“I really care about what I do and I like knowing the importance of these parts,” she said. “I may not know where they’re going, but if they come back to me, I want to be proud of what I’ve done.”

Markeia encourages others to pursue manufacturing if they have the following traits: a mindset that is well-rounded with particular attention to details, strength as a person, and an ability to communicate well and understand how machining and partmaking works.

Previous Article
At Age 50, A New Career In Manufacturing
Next Article
Libertyville A Finalist To Land $8.3M Probiotic Manufacturing Complex